The Bankers’ New Clothes is a book much longer than it needs to be, which expresses several simple ideas, some right, some wrong, which would have made a very interesting and provocative article. Its principal ideas are as follows:

1. Increasing leverage, that is, debt relative to equity, increases risk. No one doubts that this is true. The book has an overly lengthy, elementary discussion of this basic point.

2. Banks and the banking system would be safer and less prone to crisis if they had more equity capital and less leverage. Undoubtedly right again.

3. Under current circumstances, banks rely on the government’s credit. It would be good to reduce this reliance. Again, right.

4. The central proposal is this: Banks should have not just some more equity capital, but a lot more. The authors don’t want to fiddle with changes from bank capital of 3% or 5%, to 6% or 8% of total assets, but want to require a huge increase: to 20% to 30% of assets. This is interestingly controversial territory. Such a change, if it could be achieved, would indeed make banks safer and much less dependent on the government. That would be good–personally, I have a good deal of sympathy with the idea. But would such a change have other, costly effects? Moreover, is it even possible to get there from where we are? That is highly dubious and the crux of the book’s argument with most financial experts, both bankers and regulators. The specific numbers of 20% to 30% are basically asserted, not derived by analysis.

5. The authors maintain it would be relatively straightforward and easy to get to the capital levels they envision, and without adverse effects such as the cost and availability of loans. The banks “simply” have to retain all their profits, have dividends banned, and sell massive amounts of new stock, they suggest, which will “merely” depress their return on equity, and this won’t matter. This is addressed mostly by assertions, with virtually no data or empirical analysis.

6. The book conveys a naïve faith in financial regulation, and suggests that everyone should share such faith, as the authors obviously do. This is the most disappointing element of their discussion, put forward as a credo.

Walter Bagehot wrote the greatest book on banking, Lombard Street, in 1873. In one of the many memorable formulations in this book, he said:

The main source of the profitableness of established banking is the smallness of the requisite capital.

The smallness of the capital is exactly what Admati and Hellwig have also observed 140 years later. They want to replace it with bigness of capital, which is neither original nor unreasonable. The key question they raise is: how big is big?

Requiring bigness of capital was not, however, the implication that Bagehot drew. He focused instead on the resulting need for banks to have assets which are conservative, transparent and very safe. “The only securities which a banker, using money he may be asked at short notice to repay, ought to touch, are those which are easily saleable and easily intelligible. If there is a difficulty or a doubt, the security should be declined,” he wrote. Further: “A banker deals in only the most sure securities, and with those which yield the least interest.” 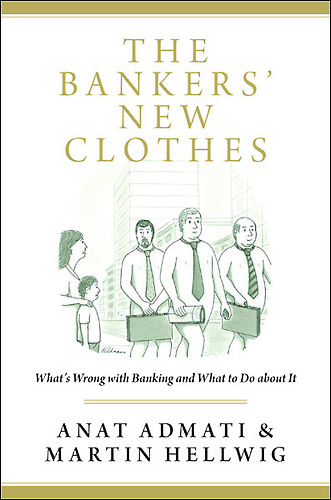 Needless to say, this prescription has not survived. Banks today are stuffed with loans and securities which are liberal, opaque and risky. This naturally makes borrowers happy, at least in the short term, and it is what politicians avidly want and demand of the banks whose liabilities, “which they may be asked at short notice to repay,” are now guaranteed by governments. If the government is guaranteeing your liabilities, naturally it gets more power to tell you what to do, including inducing or directing you to make more loans to its political supporters.

As Admati and Hellwig rightly say, “The history of banking regulation is full of rules directing banks to fund activities to which the political system wants to give preference.”

So we arrive at a combination of risky and opaque assets, smallness of capital, liabilities subject to withdrawal at short notice, and moral hazard created by the government’s shifting the cost of failure from banks and their creditors to the public—at least to that portion of the public which pays taxes. Admati and Hellwig observe, as have many others, how this combination creates systems prone to periodic collapse.

To address the problem they recommend both very much more capital and somehow or other, better regulation. Taking the capital first: if risky assets are a fact, and so is moral hazard from government guarantees, and therefore bigness of capital is needed, to repeat: how big is big?

The combined U.S. banking regulators are proposing a required ratio of equity capital to total assets of 5%- 6%. Professor and banking expert Charles Calomiris, in a review of the The Bankers’ New Clothes, proposes 10%, as contrasted with the book’s proposal of 20% to 30%. This makes quite a range!

As Calomiris says, if you believe the costs of achieving massive increases of capital are zero, you would pursue the bigger number, but in his view the costs, especially of constricting the supply of credit, are likely in fact to be substantial, although this is assertively denied by Admati and Hellwig. “In their well-intentioned zeal to make the case for how beneficial, simple, and costless it would be to mandate dramatic increases in bank equity ratios, they overstate the benefits and understate the costs,” Calomiris argues.

It is certainly clear that the capital of contemporary banks by itself is not sufficient to “assure the public and induce it to trust the concern.” Instead the public is assured by and the banks are dependent on government guarantees. These guarantees serve as part of the banks’ capital in Bagehot’s sense, along with the private equity.

How much of the capital is the government’s and how much is the private shareholders’? That depends on what you think the capital ratio would be in a true free market in banking—the capital ratio that would be required by the competitive discovery of a market, as opposed to what regulators would set or academics propose.

Suppose a current bank has a capital ratio of 5%. If you believe 6% is the real market number, then the bank is effectively owned 83% by its shareholders and 17% by the government. If you take Calomiris’ 10% as the real number, the effective ownership shares in this case move to 50%-50%. If you think a market would require 30%, then the private shareholders currently provide 17% of the capital and the government 83%.

Recall that when the government guarantees the banks, it gets more power to tell them to make loans to the government’s political constituencies. This logic can also run in the opposite direction: if the government wants to direct the banks to make such loans, it is only fair that it has to put up some of the capital.

In any case, as the ratio of private capital increases, the percent of effective government capital decreases. Admati and Hellwig see this relationship clearly and want to reduce the government’s share. So far, so good. But what is the real capital ratio a genuine market would require? Surely a bigger number than the current regulatory ratio, but how much bigger?

Since we do not have a competitive free market in banking, we do not know the answer.

Admati and Hellwig are not suggesting a freer market in banking. They believe in future regulation which will somehow be more successful than all the regulation of the past, which has so notably failed to prevent, and often enough has helped cause, recurring bubbles, busts and panics. How plausible is their belief?

The authors quote the Financial Crisis Inquiry Commission: “Widespread failures in financial regulation and supervision proved devastating.” Like that Commission, they insist that this is really an argument for more regulation: “Rather than throwing up our hands, we should take up the challenge of effective regulation.” In spite of “the failure of previous regulation,” surely the regulators will do better next time! This is manifestly an act of faith. A more reasonable conclusion would be to question the inherent ability of regulation to do what its promoters believe it can.

The simple idea that more regulation will do better next time, is appealing to many academics, most leftish politicians, and to regulators themselves, but less so to thoughtful observers. The realities of regulation are ineluctable ignorance of the future, pro-cyclical exaggerations of booms and busts, and efforts whose outcomes are quite different from their good intentions—although given the political nature of regulation, even good intentions cannot necessarily be assumed.

Ironically, the less faith you have in regulation, the more inclined you will be to think that capital ratios need to be bigger.

How Big is Big?

If we were starting with a clean banking slate, and could create a free, competitive market in banking, the market might or might not discover that a capital ratio of 20% or 30% would be needed to guarantee the business and assure the public—Bagehot’s requirement. Such a banking market would have no government-directed loans to politically-favored recipients, and would to that extent be less risky and need less capital. But given our actual situation, that is, a banking system deeply dependent on government guarantees, with heavy government direction of credit, shot through with the resulting distortions, we are not going toward a free market in any case.

So given the utter lack of a market answer, now or in prospect, Calomiris’ 10% capital ratio proposal might be a more reasonable guess for the government-entwined banking system we in fact have got than the guess made by The Bankers’ New Clothes. Well, Reader: What’s your guess?

Does Obamacare Secure the Blessings of Liberty?

The Crown Must Win

In The Crown, the ideology of autonomy and endless emancipation, one that has shaped the post 1968 imagination, stands under judgment.