“Their polls shall slide in due time.”

In this verse is threatened the vengeance of God on the wicked and unbelieving politicians, who are surely not God’s visible people, and who live under the grace of the voters; but who, notwithstanding the offices they receive from people, remain void of counsel, having no understanding in them. Under all the cultivations of democracy, they bring forth bitter and poisonous fruit. . . .

The expression I have chosen for my text, their polls shall slide in due time, seems to imply the following things, relating to the punishment and destruction to which these wicked pols are exposed:

1. That they were always exposing themselves to destruction; as one that stands or walks in slippery places is always expected to fall. The same is expressed in the Psalm: “Surely thou didst set in them slippery policies; thou castest them down into destruction.”

2. It implies, that they were always exposed to sudden unexpected destruction. As he that lives by slippery words is every moment liable to fall, he cannot foresee one moment whether he shall be exposed the next; and when he does fall, he falls at once without warning.

3. Another thing implied is, that they are liable to fall of themselves, without being thrown down by the hands of others; as he that lives and dies by slippery words and triangulation needs nothing but the weight of his own words to throw him down. . . . 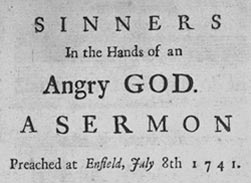 The natural Spinmeister’s prudence and care to preserve his reputation, or the care of his minions to preserve it, do not secure it a moment. To this, divine providence and universal experience do also bear testimony. That if it were otherwise we should see some difference between the wise and politic men of K-Street and Capital Hill, and others, with regard to their liableness to early and unexpected political death: but how is it in fact? . . .

The public that holds you over the wilderness, much as one holds a spider, or some loathsome insect over the fire, abhors you, and is dreadfully provoked: its wrath burns like fire; it looks upon you as worthy of nothing else, but to be cast into the fire; they are of purer eyes than to bear to have you in their sight; you are ten thousand times more abominable in their eyes, than the most hateful venomous serpent is in yours. You have offended them infinitely more than ever a stubborn rebel did his prince. Yet it is nothing but their whim and indifference that hold you from falling from grace every moment. It is to be ascribed to nothing else, that you did not go to hell last night; that you was suffered to awake again to the political game this morning, after you closed your eyes to sleep. . . .

The wrath of the voters is like great waters that are dammed for the present; they increase more and more, and rise higher and higher, till an outlet is given; and the longer the stream is stopped, the more rapid and mighty is its course, when once it is let loose. It is true, that judgment against your evil works has not been executed hitherto; the floods of the voters’ vengeance have been withheld; but your guilt in the mean time is constantly increasing, and you are every day treasuring up more wrath; the waters are constantly rising, and waxing more and more mighty; and there is nothing but the mere pleasure of God, that holds the waters back, that are unwilling to be stopped, and press hard to go forward. . . .

Therefore, let every one that is in office, now awake and turn from the wrath to come. The wrath of the people is now undoubtedly hanging over a great part of this delegation. Let every one fly out of Washington: “Haste and escape for your lives, look not behind you, escape to the mountain, lest you be consumed.”

Whelan on McGinnis and Rappaport’s Originalism and the Good Constitution: Part II — Precedent