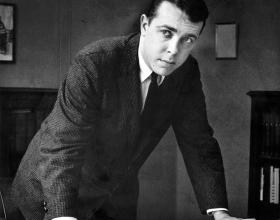 Stan Evans died this past week at the age of 80. Other, much closer friends have celebrated and will continue to celebrate his lasting contributions to the cause of liberty. I miss the man because he was never one for a conservative pity party; always willing and eager to go one more round; deeply serious and at the same time hilarious, at hard-to-match levels. Two memories stand out:

A few years ago the Philadelphia Society invited me to give a talk on (what else?) federalism. What they didn’t tell me was that Stan would introduce me. So we sit down at the head table and Stan says, “I’ve read your book [The Upside-Down Constitution]” and I’m like “That’s great because no one else has and if I were your age [78 then] I wouldn’t either” and he says, “Explain to me how we can persuade our friends that Erie is the key and it’s wrong” and I’m like “In two minutes?” and he gets up and introduces me, whereupon I end up giving a talk to an audience that had collapsed on the floor in laughter over his remarks. Thanks, my man.

Some hate speech case before the Supreme Court. Stan brings the students from his National Journalism Center to the front steps. Also there: tons of women’s rights and civil rights groups; placards and slogans and cameras everywhere. The media are basically done with the questions and are packing up their equipment when around the corner comes the American Nazi Party in full regalia—brown shirts and swastikas. And Stan, still in full camera view, says: “That’s the last event I’ll ever do with the Nazis. They’re always late.”

You can come up with that only if you comprehend the genius and the sheer idiocy of American politics, in your gut. Stan did. God bless his heart.