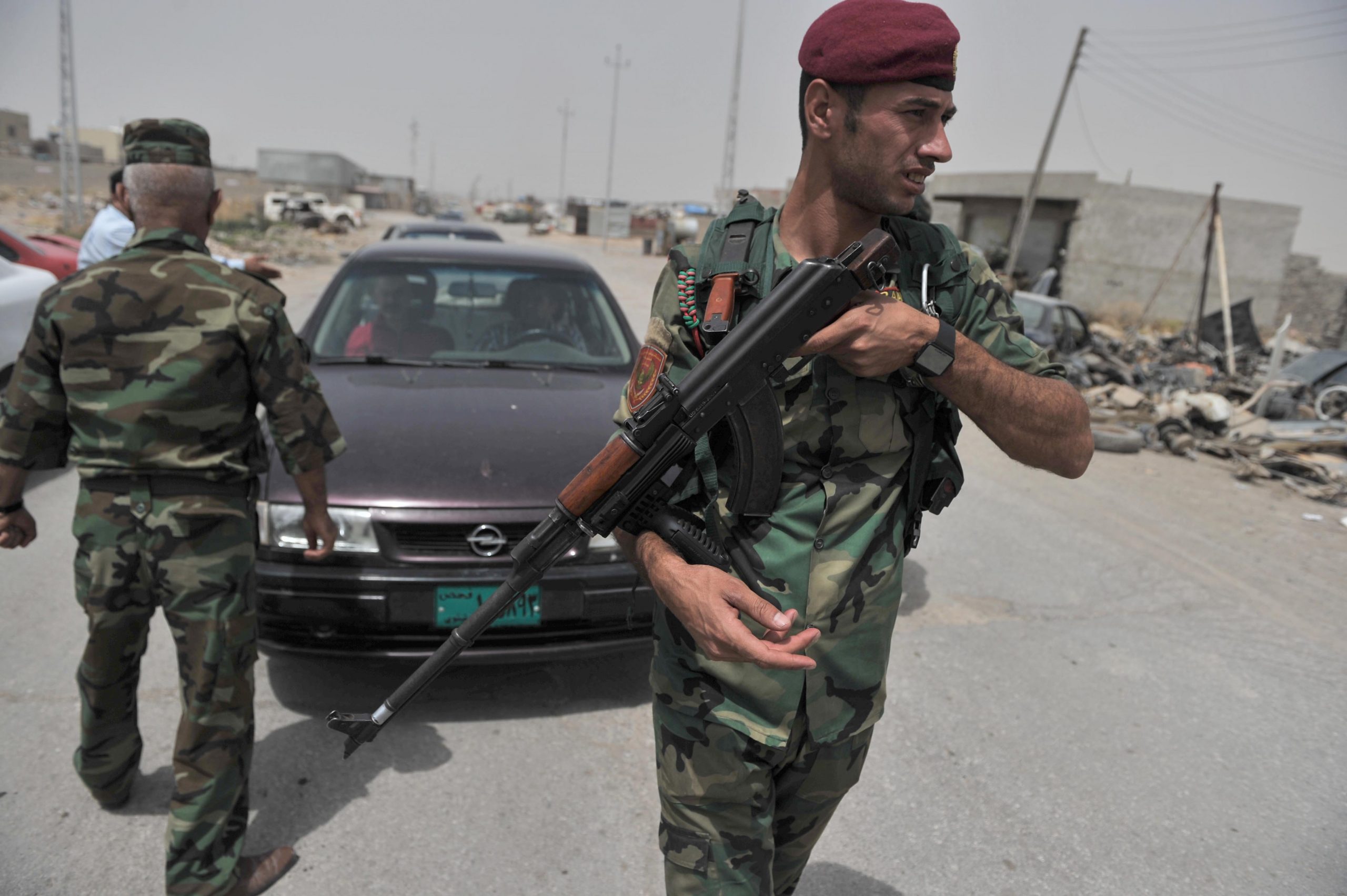 Peshmargas of Iraq Kurdistan Regional Government take security precautions on Mosul-Erbil road on the outskirts of Mosul after the militants of Islamic State in Iraq and the Levant seized Mosul, in Iraq on 12 June, 2014.

Sunni fighters from around the Muslim world, having failed to conquer all of Syria from the Assad regime’s Alewites (a branch of Shia Islam) have been pushed eastward into majority-Sunni areas. These extend from east-central Syria into north-central Iraq. A wholly artificial border divides them. In recent days, they have established control over Sunni-majority areas of Iraq, from Fallujah and Mosul to the edges of Tikrit and Samarra. Our foreign policy establishment’s illusion that world events are principally about the United States, and its reflexive commitment to existing international borders, has led it to misunderstand that the region’s wars have been about re-drawing the unnatural borders imposed by the Wilsonians who subdivided the Ottoman Empire in 1919.

Our establishment, having neither ideas nor means for stopping this re-drawing, has reacted by hand-wringing (e.g. “the fall of Mosul” WSJ 6/11). Herewith, some suggestions for understanding these events’ implications for U.S. interests.

The overthrow of Saddam Hussein in 2003, regardless of U.S. motives, made it possible for all of the region’s peoples to set about forcibly securing the political arrangements they desired. In the war that followed Saddam’s overthrow, the U.S. government believed that the issues were moderation versus extremism, democracy versus autocracy, and modernity versus the Middle Ages. But the folks who were actually doing the fighting had other things in mind.

The objective of Iraq’s Kurds, unequivocally, was to establish Kurdistan — with its own excellent army (the Peshmerga) its own language, flag, and institutions. They achieved all that, have invited Kurds living inside Syria, Turkey, and Iran to join them, and have mostly watched the region’s other peoples fight among themselves.

In this “Iraq War,” Syria played an ambiguous role. That ambiguity prevented its becoming a straightforward struggle between Sunni and Shia from the entire Muslim world. But it contributed to the ensuing Syrian civil war, which became precisely such a struggle. Syria did act as the conduit and headquarters for Sunni forces from around the Muslim world fighting the Shia and the Americans in Iraq. It did this though ruled by Alewites and allied as it was with Shia Iran. It played this ambiguous role because its ruling party, the Ba’ath was closely tied to Saddam’s ruling Ba’ath party in Iraq. But this balancing act did not lessen the hatred that Syrian Sunnis bore for Assad’s Alewite regime. Moreover, Sunni Muslims from around the world were terribly disappointed by the war’s result: Iraq ended up largely ruled by Shia.

Thus in 2011, as the Americans were leaving Iraq, Sunni elements in Syria as well as in Iraq stepped up their fight for power in their own country drawing from most (but not all) of the same sources in the Persian Gulf that had fed their fight in Iraq. They had long since learned to disregard the Iraqi-Syrian border.

But something had changed, that turned their fight into the Muslim-World War that it became, namely that Iran was now supporting both the Syrian and the Iraqi regimes as best it could. This drew the war’s line, bright, straight, unambiguous, and bloody, between Sunni and Shia. This drew to Syria Sunni fighters from all over the world.

The Sunni fighters’ immediate objective was Syria. But Syria proved to be too well defended by Iran (with Hezbollah as its foreign legion) as well as by a trove of very modern arms from Russia. Moreover, although Sunni fighters came from all over, including Europe and America, financial and logistical support from the Arab world came mostly from Gulf regimes that are themselves threatened directly by local Shia populations, especially Qatar. The Saudis and Egyptians, more afraid of subversion by fellow Sunnis that they cannot control, funded forces that ended up splitting the Sunni front – with some help from the U.S. government.

Pushed into Syria’s eastern end, the international Sunni brigade flowed into Iraq and joined with their local brethren. Jointly, they control a compact area comparable in size to that which Iraqi Shia control to the Southwest, to what the Syrian regime controls to the West, and larger than what the Kurds control in the North. This Mesopotamian Sunni-stan is poor, however, land-locked, and surrounded by peoples who are very much on guard against its conquerors. It is difficult to imagine what power these people might wield once money from the Gulf stops coming in.

It would behoove U.S. policy makers to stop impotent regrets about the loss of a “united, democratic, progressive Iraq,” which ever existed only in their own minds. Rather, they should get used to the region’s new map and demand of Sunni-stan’s sponsors in the Gulf that they guide it to getting along with its neighbors.

Sniff, Collect, and Exploit it All

Down and Out in Syria

Sect and Power in Syria and Iraq