In 2004 leftwing filmmaker Michael Moore released his film Fahrenheit 9/11, a searing attack on the legitimacy of George Bush’s election to the presidency in 2000, and his handling of events before, during, and after the terrorist attack of September 11, 2011 on the World Trade Center. Moore was unequivocal in his stated hope that the movie would “help unseat a president.”

Fahrenheit 9/11 was produced by Moore’s production company Dog Eat Dog Films, a corporation. At the time – before the Supreme Court decision in Citizens United v. Federal Election Commission—it was illegal for corporations to spend money “in connection with any election to any political office,” and illegal for an officer of a corporation to consent to such an expenditure.

Imagine if fourteen months after the election, Moore had been indicted by a Bush-appointed federal prosecutor for violating the prohibition on corporate spending. Imagine if Moore was arrested, cuffed, criminally charged for his activities, had his passport confiscated, and bail set at $500,000–what would have been the reaction from the America’s liberals? Of the press? Of Senator Barack Obama? 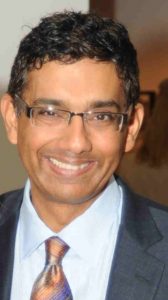 Something much like this is, in fact, going on now, with nary a peep from the mainsteam press or the American left, and definitely not a peep from the President. Last month, Dinesh D’Souza, a long-time conservative commentator and director of the 2012 documentary film 2016: Obama’s America, was arrested, cuffed, and had his passport confiscated before being released on $500,000 bail. His alleged crime? Reimbursing four other individuals for making $5000 campaign contributions to the unsuccessful U.S. Senate campaign of his college friend, Wendy Long.

It didn’t take long before a Matt Drudge tweet had conspiracy theories began buzzing around the conservative internet. Then Gerald Molen, co-producer of 2016, told the Hollywood Reporter that prosecutors were “criminalizing dissent through the selective enforcement of the law.”

The response from the mainstream press has been to pooh-pooh such concerns as conservative paranoia. But as Joseph Heller wrote in Catch 22, just because you’re paranoid doesn’t mean they aren’t out to get you.

For years the political left has been wrapped up in the notion of “campaign finance reform.” “Reform” has aimed to limit the speech of a litany of “conservative” villains—the “wealthy,” the “rich,” the National Rifle Association, “big oil,” banks, the Koch Brothers—who are supposedly frustrating the will of the people by preventing a variety of liberal policies—gun control, higher capital gains and income taxes, oil taxes, environmental legislation, single payer health insurance—from passing. Then, in January 2010, the Supreme Court decided Citizens United v. FEC in the same week that Scott Brown’s improbable Senate victory in Massachusetts demonstrated to the President and congressional Democrats the real unpopularity of Obamacare and much of the President’s agenda. Ever since, Democrats have been at fever pitch calling for new restrictions on the speech of their political opponents.

Within days of Citizens United, Senator Chuck Schumer (D. N.Y.) announced plans to introduce legislation with the comment that one should not underestimate the “deterrent effect” it would have on the political speech. Over the next year, the President publicly accused his critics of being “a threat to our democracy” and “a problem for democracy.” At least nine Democratic Senators wrote to the IRS demanding investigations of conservative political groups, not including Carl Levin (D. Mich.), whom former IRS Commissioner Steve Miller told investigators was “complaining bitterly” to the IRS about the need to go after Conservative groups. Indeed, in the same week that D’Souza was arrested, Senator Schumer publicly again urged the President to use the IRS to silence his conservative critics.

Within months of the Citizens United decision the IRS began its practice of targeting conservative non-profits, delaying their applications for tax-exempt status and making intrusive demands into their activities. Last spring Senator Sheldon Whitehouse (D. R.I.) convened a hearing of the Senate Judiciary Committee Subcommitee on Crime and Terrorism to discuss “abuses” and accused various conservative groups of violating the law.

Meanwhile, conservatives felt the bite in other ways as well. The tax return, and with it the names of donors to the National Organization for Marriage (NOM) were leaked from the IRS to the Human Rights Campaign, a pro-gay rights group that had been demanding the names of NOM’s donors and threatening them with boycotts of their businesses and employers. After starting a conservative non-profit called True the Vote, Catherine Englebrecht found her business audited by three different government agencies, and was visited at least six times by the FBI. In her prior twenty years in business, she had never been audited or investigated. Coincidence?

I have no idea if Dinesh D’Souza is guilty of the alleged campaign finance law violations. One cannot make campaign contributions in the name of another or exceed the legal limit—then $5000—to a candidate in a campaign cycle. But most people are not aware of this restriction, and violations of this provision are both relatively common and usually inadvertent. Such violations are typically handled as civil matters, subjected to small fines. This is especially true when, as here, the race in which the violation occurred was never even competitive. Long’s Democratic opponent, Kristin Gillibrand (D. N.Y.) won with over seventy percent of the vote while outspending Long by over $13 million. Criminal indictments and handcuffs for a first-time offender will strike many as overkill.

The charges were brought by Preet Bharara, U.S. Attorney for the Southern District of New York, Obama donor, and a protégé of the aforementioned Senator Schumer. Bharara says that the potentially illegal contributions were uncovered as part of a “routine review,” but that seems unlikely, since a routine review of candidate reports typically reveals nothing that would indicate that contributions were made in the name of another. Barring a confession, you find such contributions by investigation and audit. Bharara also claims that he takes “a zero tolerance approach to corruption of the electoral process,” but after nearly five years his office has hardly established such a reputation. And if one is a busy U.S. Attorney concerned about corruption, a relatively small donation to an old friend in a hopeless Senate race hardly seems like a top concern.

There is no such thing as a benign speech police. Give government the power to harass opponents because of their political speech, and government is likely, at some point, to use it. Campaign finance laws are typically justified by the alleged need to “restore confidence in government.” But it’s hard to see this prosecution as doing anything but increasing suspicion of government.

The shame – and perhaps the most alarming aspect of the D’Souza arrest—is that Democrats seem comfortable with that.