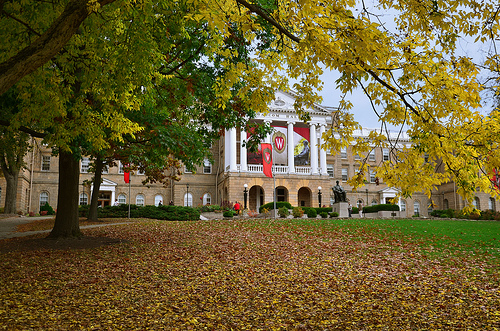 What to think of Scott Walker? I’m not necessarily against the Governor’s proposed budget cuts for Wisconsin’s higher education system. Certainly it is good to hold colleges and universities more accountable than they currently are, so they’ll be more effective. And yes, there surely are faculty everywhere, and probably in Wisconsin, who could be “teaching more classes and doing more work.”

And it’s true that the tradition of “shared governance” in American higher education has impeded administrations “from directly running things.” (See Joe Knippenberg’s excellent recent posts about this.) Administrations increasingly think of the out-of-touch faculty as a force that has to be deftly managed to accomplish needed reform; disruptive innovation could doubtless occur more rapidly if a unitary administration could rule directly, without any checks or required consultation.

It might be, though, that the Governor himself is out of touch. He’s perpetuating the illusion—popular not only among college administrators but some conservative reformers, too—that the main cause of the higher ed “bubble” is a lazy tenured faculty. The truth is that tuition and other costs have risen far more rapidly than faculty compensation. In fact the number of tenured and tenure-track faculty is on the decline.

On the rapid rise, in contrast: the number of credit hours generated by adjuncts and other temporary faculty. They, of course, aren’t insulated at all from direct administrative supervision and usually have little job security.

The savings that would come from having tenured faculty teach “one more class,” as Governor Walker recommends, are thus rather minimal, for, in the real world, the slack would generally be picked up by a badly paid adjunct. And we know that administrators who want control over the details of instruction often prefer adjuncts. Understandably enough, they are far more amenable than tenured faculty to complying with what the experts believe are the latest, most efficient, and most effective “best practices,” not to mention (to ladle on the buzz words) competency-based assessment.

Moreover, as more and more college courses are delivered online, the administration’s strong preference is to move to instructors who are basically independent contractors, whose employment is contingent on market forces.

The cost of instruction isn’t the main source of the rather shameless cost hikes presented to students and their families (and to the state governments, in the case of public institutions). Administrative bloat is on the rise, and it flows from 1) often pointless bureaucratic compliance with increasingly intrusive governmental and accreditation requirements, and 2) the institution’s interest in attaining questionable goals (often, but not always, of the “politically correct” variety) that have at best a marginal connection with learning.

Then there’s the increased sensitivity to the student as consumer. The competitive marketplace for the scarce resource of the full-time student (especially the residential kind) has produced what we could call an amenities arms race. Few institutions dare opt out. The result is hotel-style dorms, shiny health-club gyms, gourmet food, the proliferation of nonrevenue-generating Division III athletic teams, and student-affairs staffs that function like concierges. Typically, these innovations are the product of administrative initiatives in which “shared governance” does not come into play.

The excellent economist Glenn Reynolds is so disgusted by such developments that his modest proposal is for campuses to be honest, and market themselves as luxury cruises. That means spend, and spend more, on the amenities and cut, and cut more, the cost of actual education by reducing the ranks of career faculty and replacing them with various forms of online instruction and MOOCs. No college or university, so far, is going quite that far. But many are pretty far down that road. And even the small colleges that talk up the presence of real faculty have begun to describe these worthies as agents and advocates for students—in a way, just another amenity offered to the discerning consumer.

Generally, the evolution has been away from “faculty governance” in the direction of rule by administrators (facilitated by accrediting agencies). The latter function increasingly as, and are often compensated like, corporate CEOs. That this evolution has not lent itself to efficient or effective cost-control apparently has not come to Governor Walker’s attention.

But let’s be fair. Faculty share lots of the responsibility for this irresponsible change. Too many tenured professors have become careerist specialists without spirit or heart, knowing more and more about less and less. That’s as true in the social sciences and humanities as it is in the more technical or techno-light fields. Such faculty have lost interest in the broader purposes of higher education, including the indispensable function of a content-rich “general education” or “core curriculum.” They have been willingly complicit in the surrender of such comprehensive concerns to temporary and adjunct faculty, and to the administrators who hire and supervise them.

Too often, it’s not been the case that “shared governance” has been wrested away from faculty; it’s been surrendered, and all too often without a fight.

To be sure, tenured faculty have, here and there, roused themselves from their complacent and dogmatic slumber to defend their turf. But they’ve done so on the administrators’ terms, by trying to talk the talk of skills, competencies, and measurable outcomes. Such efforts are typically both inauthentic and too little, too late. It’s just starting to be noticed that an important factor in the recent rapid decline in majors such as history and English has been the pervasive trend toward truncated, competency-based general education—a trend driven by the administrative thought that educational reform should obey the priorities and methods generated by accreditors.

The result is the emptying out of the content or substance of liberal education and the proletarian-ization of the faculty. Professors are more and more subject to soft-despotic forms of assessment, induced to justify their salaries through the submission of reports based on “time on task.” When it comes to assessment measures allegedly required for accreditation, for example, faculty are involved in what amount to pointless time sucks that distract them from their real vocation. It’s the least lazy faculty who are most reluctant to comply.

Contrary to Governor Walker’s impression, I think the key to cost-cutting in higher education is to regain clarity about what higher education is and is for. And to dispense with all the amenities, regulations, administrators, and techno-gimmicks that have nothing to do with the main event.

Some Practical Evidence for a Liberal Arts Education

“A Glimpse of the Divinity”: What the Humanities Can Provide