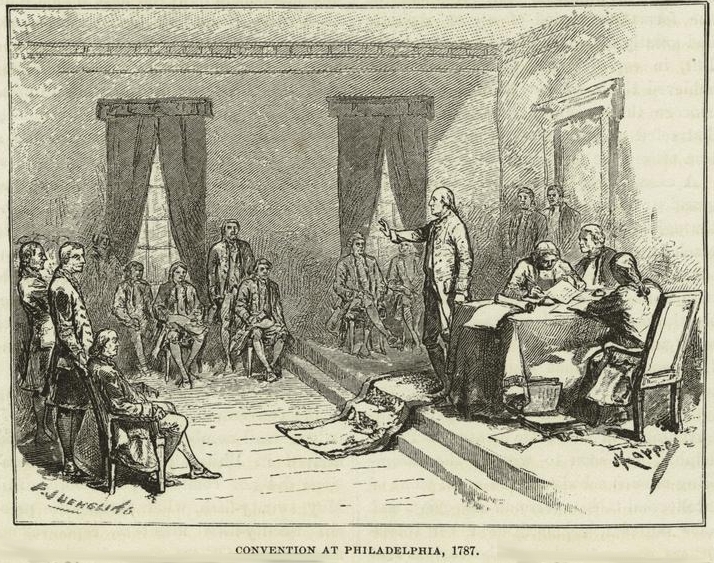 “Have you heard of the wonderful one-hoss shay, that was built in such a logical way, it ran a hundred years to the day?” If you haven’t, you’ve missed one of the most amusing poems of the nineteenth century, Oliver Wendell Holmes Sr.’s splendid satire of the American constitution. Shays or carriages break down, said Holmes, when one joint is stronger than the next. “There’s always somewhere a weakest spot, … and that’s the reason, beyond a doubt / A chaise breaks down but doesn’t wear out.” And so the Deacon built a carriage that wouldn’t break down because each part was a strong as the rest. On and on the carriage went, until 100 years from the day it was made it all turned into dust. “End of the wonderful one-hoss shay, logic is logic, that’s all I say.”

The poem was written three years before the outbreak of the Civil War, when the defects of a logical constitution seemed all too apparent to Holmes’ fellow Bostonians. Not that the Framers were logicians, of course. They were almost all practical politicians and simply strove to give us something better than what they had had. In this they succeeded wonderfully, with compromises patched together from here and there to secure everyone’s assent, save for a trimmer and a couple of grouchy older delegates. But in time their constitution came to be understood as a logical, rational document, the highest product of pure reason during the Age of Enlightenment. Like the shay’s spring and axle and hub, the constitution’s separation of powers kept every part of government in equipoise, so that no one part would become stronger than the rest. According to the celebrated Montesquieu, anyway.

I don’t know whether Friedrich Hayek read the poem. Very possibly he did. He would, in any event, have enjoyed the message about the fallacy of subjecting society’s rules and institutions to the litmus test of logic and rationality. That was the theme of Hayek’s The Fatal Conceit (1988), his attack on the false science of the socialist theorist and his planned economy. But Hayek never took the further step of questioning the American constitution as an example of the planner’s hubris. He approved of the system of checks and balances in the constitution’s separation of powers, and why not, for it worked better in his day. Things are different now, however, and Hayek, who above all was an empiricist, would likely want to second-guess his earlier judgment were he alive today.

What the Framers had done, in the 1787 Convention was to cast in stone a facsimile of the 1787 British constitution, with its King, House of Lords and House of Commons. But even as they wrote that constitution was evolving. The King and House of Lords were losing power, and after the 1832 Reform Act the House of Commons began to emerge as the sole branch of government with real political power. That was a complete rejection of the separation of powers, and in time the new British model spread across the world, first to Canada and then throughout the former British Empire. The result today is a world divided in three, roughly equal parts. One part follows the British model of parliamentary government and the supremacy of the House of Commons; another part has adopted a presidential system with its separation of powers; while a further part, including notably China, is composed of dictatorships with nothing a Westerner would identify as a power-limiting constitution.

A Chinese dictatorship is the last thing Hayek desired. And as a liberal and an empiricist, he would have wanted to see which form of constitutional government, parliamentary or presidential, better protected liberty. Having recognized that presidential regimes are less free than parliamentary ones, he would then have rethought his support for the separation of powers.

From the empirical evidence I and Pippa Norris have collected it’s now very difficult to argue that the separation of powers promotes liberty. One can like the separation of powers and one can like political liberty, but one can’t like both. Much easier, then, for the rationalist to ignore the evidence, and erect from The Federalist Papers great mountains of theoretical speculation and political unwisdom.

Securus judicat orbis terrarium, wrote St. Augustine. The judgment of the world is conclusive. If the world’s presidential regimes most often restrict liberty, why that’s the end of it. But that argument, which shook John Henry Newman out of his Anglican insularity, will be resisted by those who think America is not to be compared to other countries. For to say that America is exceptional is precisely to say that Americans needn’t pay much attention to how they order things elsewhere (a comforting thought, given the little most Americans know of other countries).

The problem, however, is that it becomes harder and harder to think that there’s a special American liberty-loving gene. After the 2008 presidential election, where Obama campaigned as the charismatic savior of his people, or the 2012 election fought over the issue of income inequality, American elections begin distressingly to look like elections in much of the rest of the world, and not the best part either. Similarly, when America falls behind parliamentary countries in measures of economic freedom conducted by Cato, Heritage and the like, it becomes difficult to speak of American Exceptionalism.

How did it happen that countries with presidential constitutions lost their liberty? Because of all of the things that distinguished them from parliamentary countries: a head of government who is head of state and whose ceremonial status as the symbol of the country makes criticism seem like lèse-majesté; immunity before a probing opposition in the legislature; the political impossibility of removal through the impeachment procedure. To which might be added, in America, a bitterly divided electorate and a political gridlock that encourages a president to make laws by diktat and ignore the laws he dislikes, to seal himself off from critics in government and the press, and to rule as the tribune of the people and the only person elected by the country at large. If there is anything good to be said about the separation of powers, the theorist should recognize that this no longer much describes American government.

There is another way in which the theorist reveals his fatal conceit in defending a government of separation of powers. To the extent that legislation still matters, that Congress is something more that a suitable venue for a State of the Union Address, getting legislation passed or repealed in America is like waiting for three cherries to line up in a Las Vegas slot machine. Absent a supermajority in Congress to override a Presidential veto, one needs the simultaneous concurrence of the president, Senate and House. In a parliamentary system, by contrast, one needs only one cherry from the one-armed bandit, and the gridlock problem of divided government doesn’t happen. There is a nevertheless a downside to parliamentary government. Since bills require the assent of different branches of government, they might be vetted more closely in a presidential system. If the government legislates less under the separation of powers, then, that is no bad thing if good laws survive and bad laws don’t. On the other hand, it’s harder to repeal a bad law in a presidential system, which raises the question whether pre-enactment screening is more desirable than reversibility.

Posed that way, it’s clear that reversibility trumps getting it right at first instance. Bad laws, based on bad ideas, with what are conceded to have bad consequences, are enacted in both presidential and parliamentary regimes. Typically, however, bad laws are recognized only after the fact. When one Parliament reverses a prior Parliament, it does so with more information than the prior enacting Parliament. It will know better what works and what doesn’t. By contrast, separationism produces a one-way ratchet in which bad ideas are adopted and then turned into the laws of the Medes and the Persians.

The difference between the two systems resembles the difference between French and British tactics, as expressed by Wellington. Napoleon’s battle plans were beautiful to look at but would shrivel up if anything snapped, whereas those of Wellington were makeshift, held together by string, but very easy to patch up when something went wrong.

The idea that the lawmaker could anticipate all the problems that might arise with a well-drafted statute, prepared according to the most advanced scientific thought of the time, is the very thing Hayek condemned in The Fatal Conceit. More modestly, parliamentary regimes assume that, in a world of human fallibility, mistakes will be made, that “experts” are often unreliable and that dumb laws will be passed; and that what is more important is giving the legislator the ability to bring hindsight wisdom to bear in undoing laws which experience tells us were ill-planned.

The rot did not begin all at once, in America. Rather, it was like a slow-acting poison in a Sherlock Holmes novel, one that left the victim hale and hearty for many a year, but then at last did its fatal work. It has given Americans Sarbanes-Oxley, Dodd-Frank, Obamacare, obnoxious laws we must now learn to live with. If American government has gotten too large, then, if the statutory code and the Federal Regulations have caught a case of elephantiasis, that’s not surprising. The know-it-all hubris of the progressive planner was baked into the Constitution from the start.

What Happens if Obamacare Loses in the Supreme Court?

No Vacation from History

The Disposition of Common Law: A Reply to Barry Shain and John McGinnis