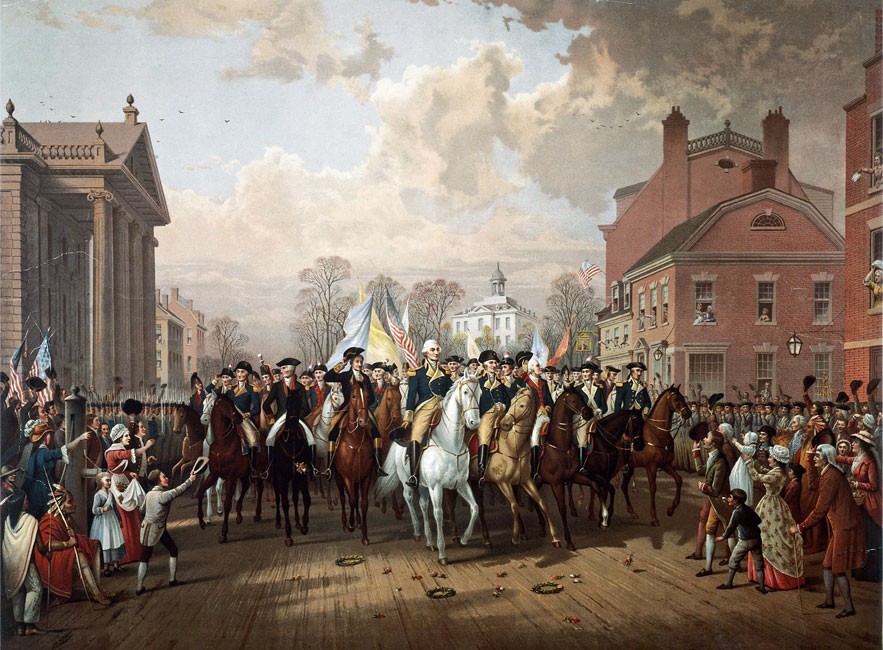 Civic minded Americans will hopefully pause on the 4th of July to reflect on the principles of the Declaration of Independence, and to the nation dedicated, however imperfectly, to the cause of liberty. In regards to the Declaration, all honor to Thomas Jefferson, as Lincoln rightly observed.

While the principles of the Declaration are considered self-evident, it is also true that men can be persuaded to wear chains, as Jefferson once noted. Thus it took the force of arms to win American independence and secure those principles. George Washington and the Continental Army, with a considerable assist from the French military, converted those ideas into reality.

Washington was responsible for one of the first public readings of the Declaration. At the prompting of the Continental Congress, the General ordered the Declaration read to his army which had gathered in lower Manhattan on July 9th, 1776:

The Honorable the Continental Congress, impelled by the dictates of duty, policy and necessity, having been pleased to dissolve the Connection which subsisted between this Country, and Great Britain, and to declare the United Colonies of North America, free and independent STATES: The several brigades are to be drawn up this evening on their respective Parades, at six OClock, when the declaration of Congress, shewing the grounds & reasons of this measure, is to be read with an audible voice.

Less than two months later, on August 27th – 30th, George Washington’s entire army was almost destroyed at the Battle of Long Island, an event which would have marked an abrupt end to the Glorious Cause, and likely have left Washington dangling from a rope. Thomas Jefferson may have also suffered the same fate, with the added indignity of having his Declaration relegated to an historical footnote. Thankfully, Washington’s army, and the cause it represented, was saved by a providentially timed fog and hesitant British leadership.

There are those who believe, both then and now, that independence and liberty can be secured without resort to the traditional modes of defense adopted by nation-states, including the establishment of a professional military and an intelligence capability. This is a fantasy. The citizen militias, celebrated in American memory, did not win the American Revolution; they in fact performed poorly at the Battle of Long Island and elsewhere. Washington, himself a former militia officer, grew to hold the militias in contempt: “I am wearied to death all day with a variety of perplexing circumstances, disturbed at the conduct of the militia, whose behavior and want of discipline has done great injury to the other troops,” he wrote his nephew shortly after the disaster at Long Island.

The Continental Army, aided and abetted by a professional French army and navy, eventually became a disciplined, semi-professional fighting force, and won the war. Tales of virtuous citizen-soldiers makes for feel-good republican mythmaking, but militias proved unreliable, at best, in the face of a professional military. The War of 1812 settled that question once and for all.

As a professional military was essential for the preservation of liberty, so to was an intelligence service. Secrecy and an aversion to transparency during warfare are as American as George Washington. With all due respect to Parson Weems, the father of our country knew how to tell a lie, and was ruthless in the pursuit of intelligence. The General urged his agents to “leave no stone unturned” in acquiring secrets, a practice his “Culper Spy Ring” adopted in New York City after the disaster at Long Island. Later in the war, Washington launched a campaign of deception directed at both his fellow citizens and the enemy, allowing him to trap Lord Cornwallis’ army at Yorktown. At Washington’s request, the first American Congress convened after the adoption of the Constitution created a secret service fund and placed it under the control of the president.

All of the American founders, including the Declaration’s principal author, held that the Byzantine world of international relations was an arena of deception, discord, and war. Jefferson understood that there would be occasions when necessity demanded that the American government employ both covert and overt methods to defend American independence. While Jefferson maintained a lifelong hostility to a standing professional military, he sought other means to protect the “empire of liberty.” Clandestine operations were one of these means, and although those operations can be abused, and have been, the power to do good, as the old maxim says, is always the power to do evil. This is why it is critical that persons of high character and prudential temperament be chosen for public office.

Myths help bind a nation, but they can also serve to distort the truth and prevent nations from adopting policies such as those embraced by our founding generation of clear-eyed realists. They saw the world as it was and recognized that liberty was “never more than one generation away from extinction,” as an American president later observed. We would do well to remember on this Fourth of July that the survival of liberty and American independence rests on those who devote their lives and sacred honor to its defense.