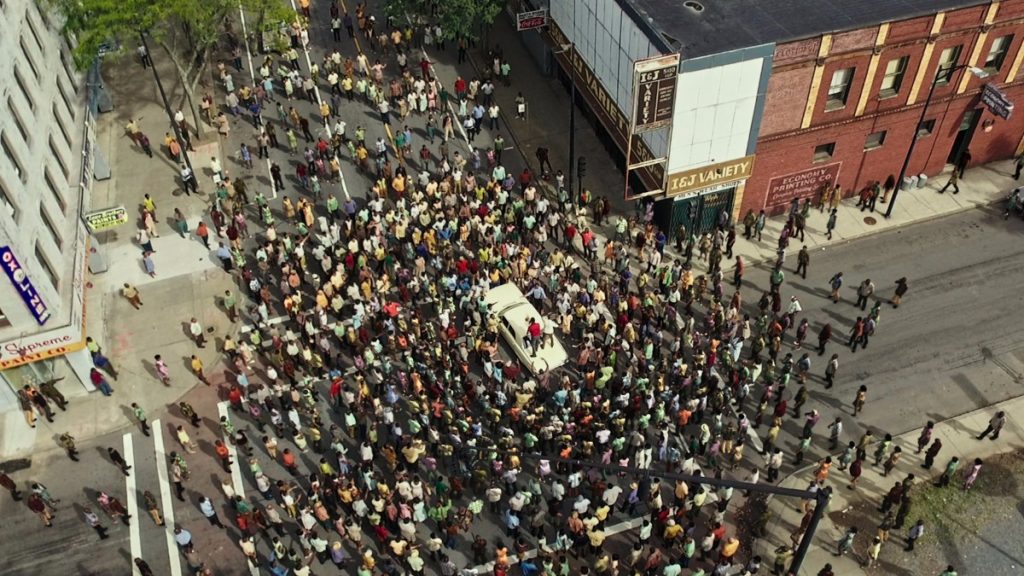 Detroit, the new film from Oscar-winning director Kathryn Bigelow (2009’s The Hurt Locker), is actually three films. The first is a documentary-style dramatization of racial tensions in Detroit in 1967 that led to riots and fatalities. The second film is a horror movie in the style of The Texas Chainsaw Massacre (1974). The third film is a standard courtroom drama.

Unfortunately, Detroit, which is powerful for its first half hour, sinks under the weight of those second and third elements.

Detroit is based on real events. In July 1967, Motor City police raided an unlicensed, after-hours bar on the city’s Near West Side. The arrests were a tipping point in a city that had been simmering with racial tensions for years, if not decades. Angry African Americans pelted police vehicles with bottles, setting off a riot that resulted in the calling in of the National Guard and state troopers. The lives of 43 people were lost in four days of chaos.

The first act, depicting the riot itself, is fantastic. Bigelow, writer Mark Boal, and cinematographer Barry Ackroyd create a collage of rapid-fire editing, strong performances, and newsreel footage to create an atmosphere of pungent anarchy. It is in this section that we are introduced to Officer Krauss (Will Poulter), a reckless, racist, and immature white cop who shoots a black looter in the back. Pale, skinny and freckled, Krauss is Howdy Doody by way of Satan. Told that he will be charged with murder for the shooting, he feebly says, “I may have clipped the guy”—and he’s then allowed back out on the street. With the city in chaos, every available officer is needed. One calm presence, black security guard Melvin Dismukes (John Boyega), tries to act as a mediator between the National Guard and the rioters.

After the first hour, Detroit abruptly shifts tone. We see an act, the Dramatics, about to go on at Detroit’s legendary Fox Theater, when they and lead singer Larry Reed (Algee Smith) are prevented by police from taking the stage. It’s just not safe. Larry and his friend Fred Temple (Jacob Latimore) take refuge at the nearby Algiers Motel, where they meet two white women, Karen (Kaitlyn Dever) and Julie (Hannah Murray). Larry and Fred take Karen and Julie to party in the room of Carl (Jason Mitchell), where they are joined by others.

These scenes are poignant and funny as the men praise jazz god John Coltrane and rib each other about having white girls there, and where Karen and Larry share an interracial kiss—no small matter in 1967. But the situation explodes when, as a joke, Carl hangs a starter pistol out the window and fires. Nearby police and the National Guard think it’s a sniper, and pretty soon Detroit cops, led by Officer Krauss, invade the motel.

One gets the sense that Bigelow is trying to atone for her film Zero Dark Thirty (2013), which was criticized in the media for arguing that torture provided useful intelligence on Osama bin Laden’s whereabouts, and helped track the terrorist down. Detroit looks to be the counterargument: Torture does not work. The filmmakers use their every tool to make that case.

In Bigelow’s defense, the actual events at the Algiers Motel were plenty bad. Police shot and killed three black civilians—Carl Cooper, Aubrey Pollard, and Fred Temple—and severely beat nine others. But Bigelow seems to be intent on wallowing in the violence as a form of virtue-signaling. It’s not enough to show the police as dense, racist, and trigger-happy; in long, drawn-out scenes, they have to embody undiluted cruelty and sadism.

By the time Detroit shifts from the motel to the court case that followed, there’s not enough time left to compellingly conclude the story—and besides, most of the audience will probably feel exhausted from watching the carnage that has preceded. The actor John Krasinski is out of place as a defense attorney who gets Krauss and the other officers off. There follows a coda revealing what happened in real life to the rest of the characters. The film regains some of its humanity, but it’s too little too late. Larry Reed was so traumatized by events at the Algiers that he left the Dramatics to lead a church choir, which he still conducts to this day.

Editing the Book of Life

Literacy Is a Good, Not a Right

A class action case against the Detroit Public Schools on its way to the Sixth Circuit shows the perils of rights talk: if literacy is a right, what isn't?

The Indebted States of America