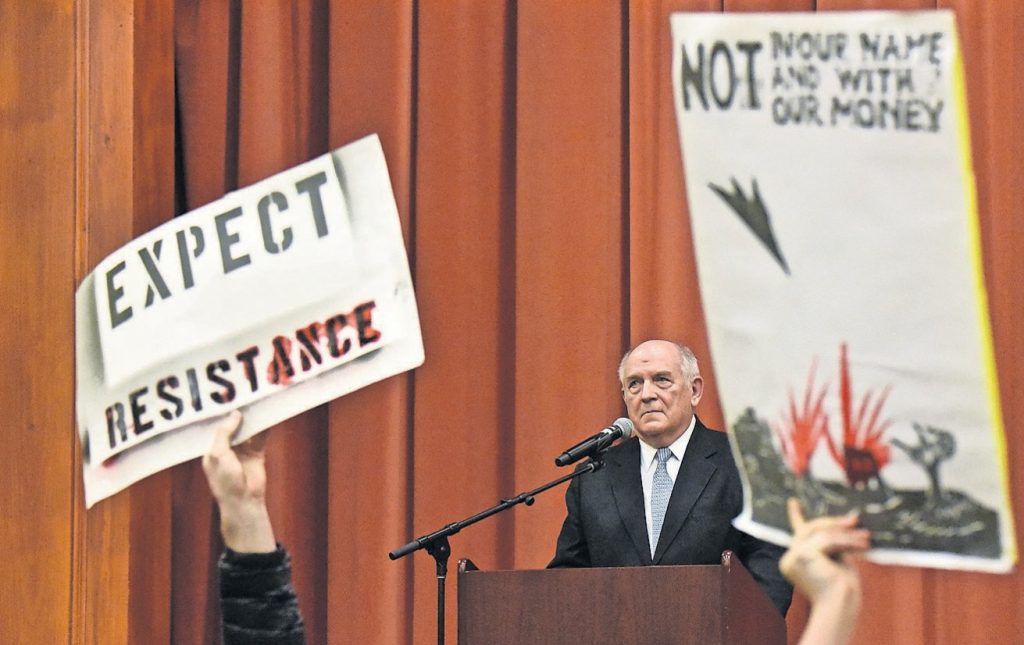 Liberals mystified by the election of Donald Trump might look to the Middlebury assault—in which Charles Murray was shouted down and physically pursued as he left campus while the professor escorting him was attacked and put in a neck brace—for a slice of the explanation. The answer may lie less in the grotesque conduct of college students awash in—wait for it, wait for it—privilege than in what the impassioned youth never said.

What they did say was the requisite chant on such occasions: “Racist, sexist, anti-gay— [fill in the blank] go away!” Never mind that the blank they filled in on this occasion, Murray, supports gay marriage, believes abortion should be left to “moral suasion” and has been a relentless voice against Donald Trump, or that the claim of his supposed racism is an old canard.

What is striking is the student protesters’ failure to connect what they were doing with any of the traditional and noble concerns of liberalism. Ditching the banner of free speech, of course, makes sense given that waving it would oblige them to listen to Murray. But what about such issues as poverty and the struggles of the working class?

Murray has written provocatively on them all, supplying ample ground for thoughtful intellectual combat, provided the Left has any gas left in the tank on such concerns. It seems rather that  the Left’s energies are mostly consumed now with issues of identity. The smaller the sexual, racial, or ethnic minority, the more intense the claims of oppression seem to be, hence the more respect it commands.

Consider transgender ideology. The prevalence of gender dysphoria is, scientific estimates say—and the academic Left all but worships science in other contexts—between .005 and .14 percent in men and between .002 and .003 percent in women. One assumes that the prevalence of self-consciousness about sharing intimate facilities with people of the opposite anatomical sex is considerably higher.

Yet the issue has now been asserted as one of rights, so it is being litigated in the federal courts. One is now expected to specify the pronouns by which one wishes to be identified. CNN host Chris Cuomo offered that the problem with a 12-year-old girl who preferred not to see male genitalia in a locker room was her “overprotective and intolerant dad.” There are few dads who would not cop to the first of those adjectives.

There is a perverse Hegelianism at work here. In his much misunderstood article questioning whether the end of Soviet communism meant the “end of history,” Francis Fukuyama suggested that liberal democracy, arising from the Hegelian quest for recognition, was the final form of government to which humanity would aspire. The result would be the emergence of Nietzsche’s “last man,” whose energies would be channeled to progressively less meaningful objects. “The end of history,” he wrote, “will be a very sad time.”

Fukuyama was wrong about much, but he was mischaracterized about a great deal more. He did not mean liberal democracy had been everywhere achieved, only that it was a final aspiration. Similarly, civil rights have not been everywhere achieved, but the Left—at this point running out of aspirations when it comes to identity—is having to invent grievances that occupy smaller and smaller ground.

Perhaps that is so because the middle-class leftists doing the inventing lack the imagination to gaze beyond their own navels. The traditional causes of liberalism are certainly not vanquished, as any reader of J.D. Vance can attest. Liberalism may not have the answers, of course, but it used to espouse the concern.

Daniel Patrick Moynihan, the foremost intellect of late 20th century liberalism and a respectful antagonist of Murray, noted that the 1962 Port Huron Statement of campus liberals contained scant reference to problems like poverty. “It is addressed,” Moynihan noted, “exclusively to middle class intellectuals and college students.”

The Greeks were right: History runs in cycles. The triumph of identity politics, which has consumed the Left and endangers mainstream liberalism, has ceded issues like poverty and the fate of the working class entirely to Trumpism. It does not matter that his protectionism has little to offer but an emotional outlet. No one else is offering even that much.

At a political science conference in Chicago this time last year, an elderly hotel porter on break was talking with two young interlocutors at a Starbucks. Each made their pitch to the older man—one by name-checking groups for the Left, the other by talking law and order for Trump. The porter listened unto frustration and then said, “Let me tell you what Franklin and Lyndon told me. They said vote for me and you’ll have a job.”

That is not to say Franklin and Lyndon were right. It is to say they spoke his language. They provided grounds for substantive, meaningful dispute with conservatism. They spoke of concerns beyond the immediate appetite for recognition. The contemporary Left, instead, is reduced to calling a roll from which growing swaths of the electorate are excluded except to the extent they identify as supporting the claims of these groups. (At a forum for candidates to head the Democratic National Committee , one hopeful said that she, as  a white woman,  admittedly  “didn’t get it.” She explained, “We have to teach [people] how to communicate, how to be sensitive and how to shut their mouths if they are white.” Goodbye, Scranton.)

This self-loathing is particularly a phenomenon of middle- to upper-class youth (annual tuition, board and fees at Middlebury: $63,332) who can afford not to have other concerns. Their “anomie,” Moynihan said of the 1960s college Left, was driven by an “educated elite” whose rationalism caused “the wellsprings of emotion [to] dry up, and in particular the primal sense of community [to begin] to fade.”

What is especially ironic is that this politics of identity, which accrues entitlements to groups, provides a veneer of community but actually arises from an intense individualism. It is the isolated individual’s demand to be recognized not for any meritorious quality or act but for who that individual is. Youth always feel entitled, of course, but there is an especially acute sense of privilege in the prima facie demand for respect and recognition from others.

That is particularly so when the demand is made without any concern for the others from whom respect is demanded. Murray’s research and writing address the predicament of those others. They are the people to whom Trump made his appeal. The campus Left notices them only to clamor for their respect and, if it is not voluntarily given, to extract it (on the fantasy that such is possible) with violence. That the inflicting of violence from behind masks on a female professor might seem—if the term is still permissible—ungentlemanly to the very people they need to persuade probably exceeds the youths’ imagination.

Consequently, they look on the Trump phenomenon in a stupor of confusion. They might look to themselves or, barring that, to Moynihan. He wrote in 1969: “If a populist, illiberal conservatism began swelling to ominous proportions in the late 1960s, the middle-class advocates of expressive violence and creative turmoil had something to answer for.” They do again.

Political Institutions Can’t Foster Virtue, They Can Only Channel Vice