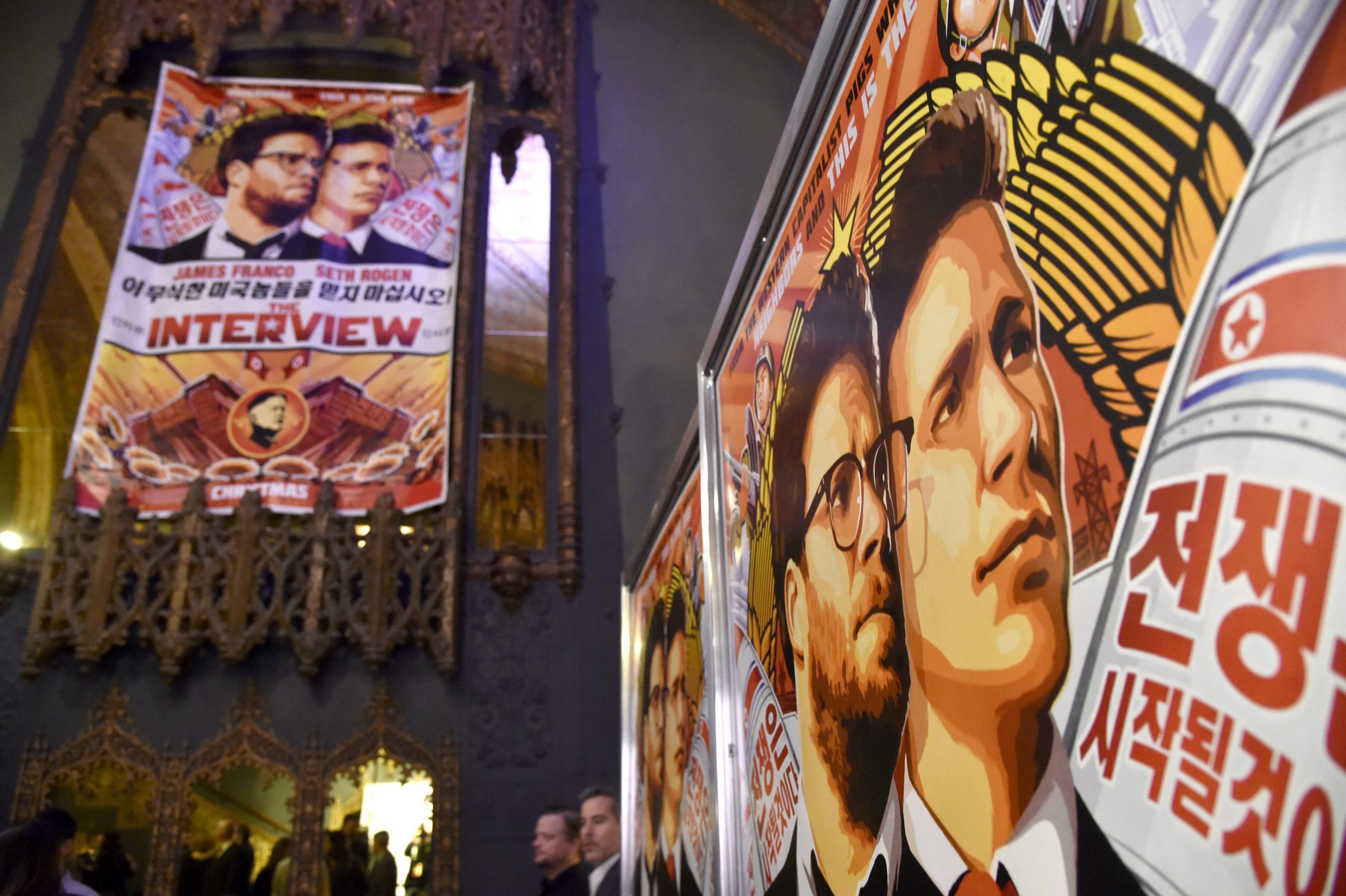 [Update: According to the Washington Post, yesterday Paramount Pictures, the maker of Team America, pulled that film—a 2004 puppet animation satirizing Kim Jong Il, among other targets—from all theaters. Alamo Drafthouse’s defiant showing of it will apparently not take place.]

Last month, when hackers invaded the personal and medical information of every employee of Sony Pictures, and then threatened to bomb any theater that screened the studio’s new movie, The Interview, the reaction was clueless.

It was a Seth Rogen comedy about the assassination of Kim Jong Un, and the hackers were presumed to be the North Koreans or their proxies. Here was a private American company being punished by sophisticated cyber-attackers from abroad who menaced life and limb. But so what—Rogen and other Hollywood figures like Aaron Sorkin did nothing but complain about the disclosure of their private emails in the massive cyber attack. The entertainment press that covers them (such as the website The Wrap) was similarly preoccupied, hyping the gossipy highlights of those emails.

That this was shaping up as a much bigger event became inescapable yesterday, though. Sony cancelled the movie’s release. Major theater chains balked at showing The Interview and Sony no doubt wanted to avoid liability should the threats of terrorism prove real.

Welcome to another cycle of politically motivated death threats and media self-censorship, one of many we’ve seen since 1989, when the Iranian Revolution gave birth to the international fatwa. Radical Islam has nothing to do with it this time, yet one senses that the defenders of the honor of Kim Jong Un—they don’t lack a sense of humor, for they have announced themselves as the Guardians of Peace or GOP—have learned from the Ayatollah Khomeini’s call for the killing of Salman Rushdie over his Quran-satirizing novel The Satanic Verses.

Threats scare people, we saw in the Rushdie affair of 1989, and more people are scared than are moved to worry about freedom of expression. Rushdie, a Briton who wasn’t much of a writer by my lights, still needed to be defended by the West. He spent nearly a decade in hiding. (And the fatwa against him was renewed by the mullahs a couple of years ago.)

We also saw, in the Rushdie affair, that there are martyrs to freedom of expression. The man who translated The Satanic Verses into Japanese, Hitoshi Igarashi, was stabbed to death. The novel’s Italian translator and Norwegian publisher were wounded.

Now threats of violence have made a Hollywood studio shrink back. Others, though, have shown defiance. For example, the owners of the Alamo Drafthouse, a theater in Dallas/Fort Worth, announced that in the absence of the Rogen movie, they are going to show Team America: World Police (2004). Team America includes a hilarious send-up of the current North Korean dictator’s father, Kim Jong Il. Remember the Alamo!

The New York Times, mind you, found it surprising that Sony would have been cheeky enough to make the movie in the first place. “To depict the killing of a sitting world leader, comically or otherwise is virtually without precedent in major studio movies, film historians say.” Ah but there is a precedent. George W. Bush was assassinated (fictionally) in the 2006 British faux-documentary Death of a President. It was a big hit at the Toronto Film Festival.

No one who disapproved of that film (and that includes me) menaced the people who made it. In this day and age, if you are considering doing satire, it is prudent to target well-behaved people. John Podhoretz made this point a while back, in a review of a wildly successfully Broadway musical by Trey Parker and Matt Stone, the same duo that came up with the Team America movie. Podhoretz wrote:

Cartoonish, cheerfully sophomoric, and often hilarious it might be; but The Book of Mormon is far more insulting to the LDS church than The Innocence of Muslims is to Islam.

More insulting yet safer, he added. Mormons tend to keep their equanimity in the face of ridicule and disrespect.

Parker and Stone, among the more wicked satirists out there, are most famous for their television show South Park. They antagonized the wrong people on that show in 2010, when they wrote an episode referring to the controversial cartoons of the Prophet Muhammad that had been printed by the Danish newspaper Jyllands-Posten. South Park was plagued by a tiny group calling itself Revolution Muslim—that is, until Parker and Stone’s bosses at Comedy Central censored the offending episode to appease the would-be terrorists.

Flemming Rose, the courageous foreign editor of Jyllands-Posten, learned a sobering lesson in the aftermath of his 2005 publication of the Muhammad cartoons. What the ordeal taught him, he told Richard Reinsch in a Liberty Law Talk interview, was that “support for free speech was not that well-grounded in Western Europe. I was surprised that so many people could not see the implications of giving in to this kind of intimidation.”

What are our leaders going to do to protect liberty of thought in the wake of the attack on Sony? The National Security Council has issued a statement:

The U.S. government is working tirelessly to bring the perpetrators of this attack to justice, and we are considering a range of options in weighing a potential response.

The response had better not be the drawing of a “red line” followed by inaction.

As for Sony, it ought to take the advice of Mitt Romney, who has urged the movie studio to distribute The Interview free on the Internet.

Trump’s core base values Trump’s grotesquerie not because they, too, are grotesque, but precisely because they are not.