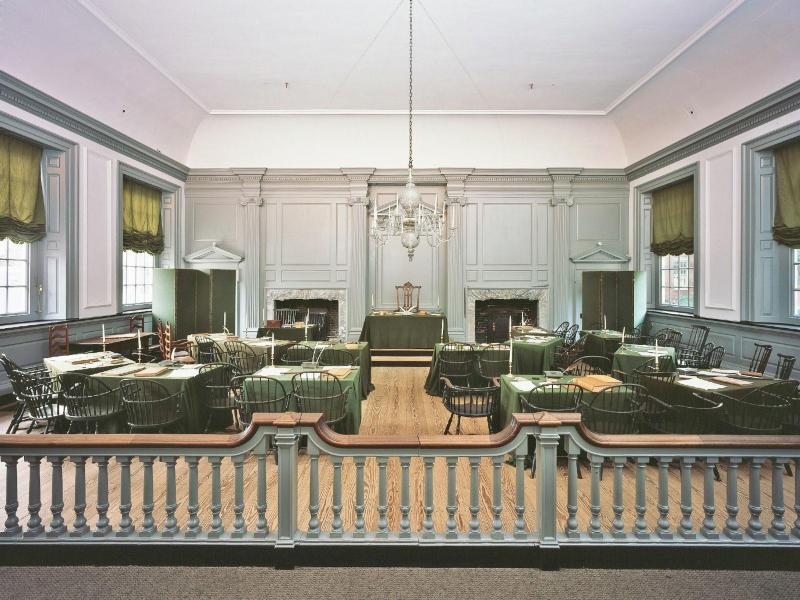 The basic idea of the “nuclear option” in the U.S. Senate is that supermajority rules exist at the sufferance of simple majorities. Last week’s decision to use a simple majority to eliminate the Senate filibuster for Supreme Court nominees was thus not the original nuclear option. The Constitutional Convention of 1787 was.

Like the nuclear option of 2017, the Framers’ resort to bare ratifying majorities to overturn a regime based on supermajorities (the Articles of Confederation) reminds us that all constitutional systems, no matter what rules they have, are based on the customs and mores that undergird those systems . That is why the legislative filibuster—one of the pillars of what remains of the institutional culture of the Senate—should be preserved.

Federalist 40 gamely makes the best argument it can that the Philadelphia Convention did not exceed its narrow writ to make the Articles “adequate to the exigencies of the union.” Publius bobs and weaves, but his punches—which include the feeble claim that as long as some residuum of the Articles remains in the Constitution, they are being improved rather than replaced—do not land.

Yet his coup de grâce does: The Articles of Confederation had failed. The Convention’s plan was better. If the people wanted to adopt it, by what republican principle should they be denied? After all, the Convention’s powers were “merely advisory and recommendatory”; all the Framers had done was “planned and proposed a constitution, which is to be of no more consequence than the paper on which it is written, unless it be stamped with the approbation of those to whom it is addressed.”

Rules, Publius argues, are not the point. Rather, self-government is. He invokes the Declaration:

[The Framers] must have reflected, that in all great changes of established governments, forms ought to give way to substance; that a rigid adherence in such cases to the former, would render nominal and nugatory, the transcendent and precious right of the people to “abolish or alter their governments as to them shall seem most likely to effect their safety and happiness.”

In fact, he continues, the very nature of fundamental change is to arise from “some informal and unauthorized propositions,” but since these propositions were “to be submitted to the people themselves,” the Convention was justified in making them. (Emphasis in original.)

It bears observation that these propositions were submitted to simple majorities in the states. While it is true that the Constitution would not go into effect until three-quarters of the states had assented, it is also true, as Federalist 39 emphasizes, that no non-ratifying state would be compelled to participate. The need for nine states to launch the new union is better understood as a requirement for a critical mass than for a supermajority. It functioned more like the comparable rule for constitutional amendments, which, as Martin Diamond noted, does not require a supermajority so much as a simple majority nationally distributed.

It is assumed today—correctly—that the difficulty of amending the Constitution means it will endure. But the difficulty itself, like the supermajority rules of the Articles or the Senate filibuster, exists at the sufferance of the nation. The likelier prospect to fear is not that of a runaway Article V convention, but that of another Philadelphia Convention, which is to say one that operates without a warrant but that claims democratic legitimacy.

Of course, neither scenario is realistic. The question is why.  Either, after all, seems utterly possible on paper. If anything, some combination of Article V and the Philadelphia precedent would seem to have supplied a formula for rapid, relentless changes in the structure of the federal government.

The reason is that the habits and mores of the people inhibit such changes, and these habits and mores tend to encourage them to respect the Constitution as fundamental law. This is the essence of Federalist 49’s emphasis on “the veneration which time bestows on every thing, and without which perhaps the wisest and freest governments would not possess the requisite stability.”

Crucially, it is in exactly this context that Publius alludes to David Hume’s dictum that it is “on opinion only that government is founded.” What kind of opinion? Opinion rooted in intellect is fickle, since there is no reason one could not be intellectually convinced a better regime is available. The kind of opinion that Publius means is emphatically not the product of “enlightened reason”; it arises, rather, from what Publius calls “the prejudices of the community.”

Edmund Burke, recognizing the vitality of habits to the maintenance of a regime, thus located the defining event of the French Revolution not in the assault on the Bastille on July 14, 1789 but in the attack, a few months later, on the royal family at Versailles. It revealed “the most important of all revolutions, which may be dated from that day, I mean a revolution in sentiments, manners, and moral opinions.” These sentiments, manners, and opinions are the latticework of constitutionalism.

That brings us to the U.S. Senate. Federalist 62 says bicameralism “doubles the security to the people, by requiring the concurrence of two distinct bodies in schemes of usurpation or perfidy.” But to accomplish this purpose, the two bodies—the House and Senate—must, the essay explains, be distinguished from each other “by every circumstance which will consist with a due harmony in all proper measures, and with the genuine principles of republican government.”

In the aftermath of the 17th Amendment, the dissimilarity now distills to institutional culture. This is not a mere matter of rules. It is a matter of habits and mores. And it is why the legislative filibuster should be retained—not because it is the product of norms, but because it cultivates them.

There are excellent arguments for making the filibuster costlier—that is, for revoking the easy filibuster adopted in 1970 with the “two-track” arrangement of Senator Mansfield (D-Montana)—so that it actually registers intensity. But the filibuster itself is central to reinforcing the norms of moderation, compromise, and deliberation that are the essence of what Publius called “the senatorial trust.”

That is not to criticize the invocation of the nuclear option last week, which the inconceivability of any decent judge’s overcoming a filibuster necessitated. It is to be rued, not reprobated.

Senatorial distinctiveness should be preserved precisely because it is essential to the Constitution we have. But the fact that we retain that Constitution after all these years—it being the product of the original nuclear option—teaches us that regimes are not grounded in rules. They are rooted in custom and mores. Like all roots, these must be tended.

Objections to Impeachment, Part 1: The Specter of Abuse

Abuse is bound to happen with any government power, but that isn't a real objection against providing the power to impeach federal officials.

Possible Change in the Filibuster Rule

Why a Majority of the Senate Can Change the Filibuster Rule