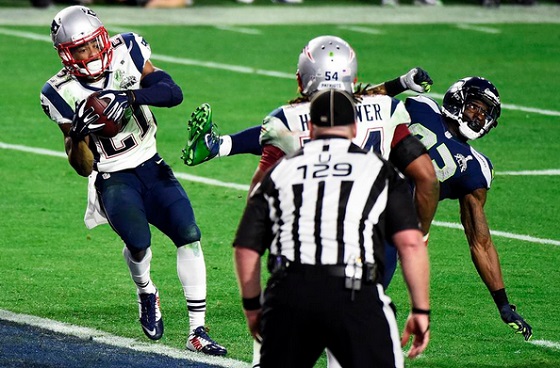 For reasons known only to their coaches, the Seahawks decided against going “beast-mode” at the end of last night’s Super Bowl. Instead of running the unstoppable Marshawn Lynch, they flubbed a quick in-route and lost the game in the last seconds. So the Patriots weren’t faced with the challenge of stopping Lynch when it mattered. And that raises to mind a missed opportunity for another Lynch, Loretta Lynch, Obama’s nominee to be Attorney General and chief law enforcement officer of the land. This Lynch, however, has been given the ball. In what some thought might be a Judiciary Committee Superbowl on her nomination, instead turned out to be a fizzle for the constitutionalists. Lynch proved she can shed tackles also (although they were arm-tackles), while making the Republicans sound more like the press-defiant, laconic Marshawn Lynch.

It wasn’t that the Senators didn’t have serious constitutional grievances—non-enforcement of existing laws, executive actions that amend or even nullify laws, treaties that create domestic law, and aerial bombing campaigns that don’t constitute “hostilities” in violation of law, not to mention the specific high-handedness in Department of Justice investigations, Obamacare, and immigration, which some senators focused on.

For example, former Justice Department attorneys J. Christian Adams and Hans von Spakovsky proposed a series of probing questions about recent DOJ practices. For example, professional misconduct such as leaking information from investigations—and they don’t even mention the unethical prosecution of Senator Ted Stevens (undertaken in the Bush years), which led to the suicide of one of the attorneys and resignation, reassignment, and mild disciplining of others, in addition to creating a new majority in the Senate.

Other commentary from the political right and the senators’ questions so emphasized the allegedly illegal or unethical conduct of current Attorney General Eric Holder that it looked as though anyone would be an improvement. Ms. Lynch testified that she was herself and not Holder, she expressed concern over most of these questions, and then said that she will look into them. Since defeating her was apparently not the goal, what should have been? Why not explain the constitutional crisis as a crisis of western civilization? This has the advantage of truth and might even persuade someone.

Writing for this site, Hadley Arkes put the focus where it should be:

Obama has given us the most precise example of the Machiavellian Executive–the one who knows that the law cannot do what it claims to do when it purportedly lays down universal rules. This Executive works by laying hands on particular persons and giving them the whip or sting of the law.  Those invested with this form of executive power know that their real power has little to do with statutes, but everything to do with their daring and decisiveness.

One has come to expect little of the House, which decided it needed to pass a resolution to sue the President for some of his actions—thus implying they had to wait for a Court decision to vindicate themselves.  And, the Senate, judging by this recent performance, may be no better.

Perhaps the most revealing Senator’s statement was given by Sheldon Whitehouse (D-Rhode Island). His defense of Holder is astonishing—that he had to politicize Justice in order to depoliticize it (hauling up along the way John Yoo and the resignation of Attorney General Gonzalez).

“We were exposed to hiring practices within the Department that were on their face overtly political and had political litmus tests. A first in the Department’s history, never gone that way before and ultimately a series of other issues as well that led to the resignation of the Attorney General of the United States. So it is easy to critique Attorney General Holder and blame him for politicizing the Department, but I think history’s calm and dispassionate judgment will determine that this brought the Department back from a place it was sadly politicized, and I can say first-hand that a lot of my U.S. Attorney colleagues from Republican and Democratic administrations were very, very concerned about what was happening to the Department.”  (emphasis added edited from C-SPAN’s closed caption text, at 2 hours, 13 minutes).

Having worked briefly as a speechwriter for Attorney General Gonzalez in 2006, and thus with some of the principals in the events leading to his resignation, I would add a couple observations about Justice: First, appointees, even U.S. attorneys, serve at the discretion of the Attorney General. If he cannot fire them, he has no control over his own Department, and they can become rogue attorneys, answerable to no one. Second, some of the individuals who resigned, with Gonzalez, were sterling people, others not so, but that scarcely speaks to the rightness of the policy, which again is completely in the discretion of the Attorney General. Unfortunately, Gonzalez had a poor grasp of the political situation, was compromised by being a Bush loyalist, and was served badly by those who should have shown more loyalty to him. Gonzalez was a flawed instrument for doing what needed to be done—even assuming everyone knew what they were supposed to be doing. This all played into Senator Whitehouse’s rewriting of history.

Justice Department veterans Adams and Spakovsky, and many of the Senators, know the particular issues, but they don’t present the whole picture that advocates of constitutional government need to know.  To a general listener the Republican senators seemed to be raising gripes about Obamacare and immigration, not about fundamental principles at the core of republican government. Thus partisanship appeared to obscure the key constitutional deviations of Obama Administration.

The answer is not to foreswear partisanship. Nor, most definitely is it time to search for “neutral principles.” (It actually never was.) It is rather the time to recall first principles, as the Virginia Declaration of Rights of 1776 put so well: “That no free government, or the blessings of liberty, can be preserved to any people but by a firm adherence to justice, moderation, temperance, frugality, and virtue and by frequent recurrence to fundamental principles” (emphasis added).

These “fundamental principles” are the equality, natural rights, and consent of the governed articulated in the Declaration of Independence. These provide the legitimacy of the Constitution and subsequently the laws passed under it. They are literally principles worth fighting for, as both the Revolution and the Civil War make clear.

These principles disappeared as the Progressive forces of history replaced natural rights, which made law merely the product of majority will or whatever norms of legitimacy a society recognizes—that is, justice as the desire of the stronger. The result is that the argument for constitutionalism is now grounded not on philosophic truths but on power, emotions, traditions, religious beliefs, or even tastes.

And this has reduced the fight over the Constitution and its principles to legal interpretation and disputes—a venerable discipline, to be sure, but not likely to unleash the spiritedness necessary to sustain the fight that is needed. The case for a legal positivist constitutionalism rests on private passions (including ambitions) and lacks public dignity and worth. Thus it must attempt to achieve such dignity through avowing “neutral principles” or other rubrics. Such conservatives cannot contain the historically charged fury of a Senator Whitehouse, let alone an Elizabeth Warren.

Partisanship on behalf of the Constitution works only if it is based on the principles that make a Constitution possible. The Progressive Constitution, which dominates us today, dismissed that hoary past and plants its flag in Franklin Roosevelt’s First Inaugural, a mere reflection of executive will. “I shall ask the Congress for the one remaining instrument to meet the crisis—broad Executive power to wage a war against the emergency, as great as the power that would be given to me if we were in fact invaded by a foreign foe.” Obama’s Machiavellianism pushes that vision even further—he doesn’t even bother to ask Congress.

His nominee Loretta Lynch has an easy way to confirmation victory, as easy as, to revert to entertainment, Marshawn Lynch would have scored from the 1-yard line.

Higher Education and the Long Arm of the Law, Part II

Stumbling Toward a Compromise