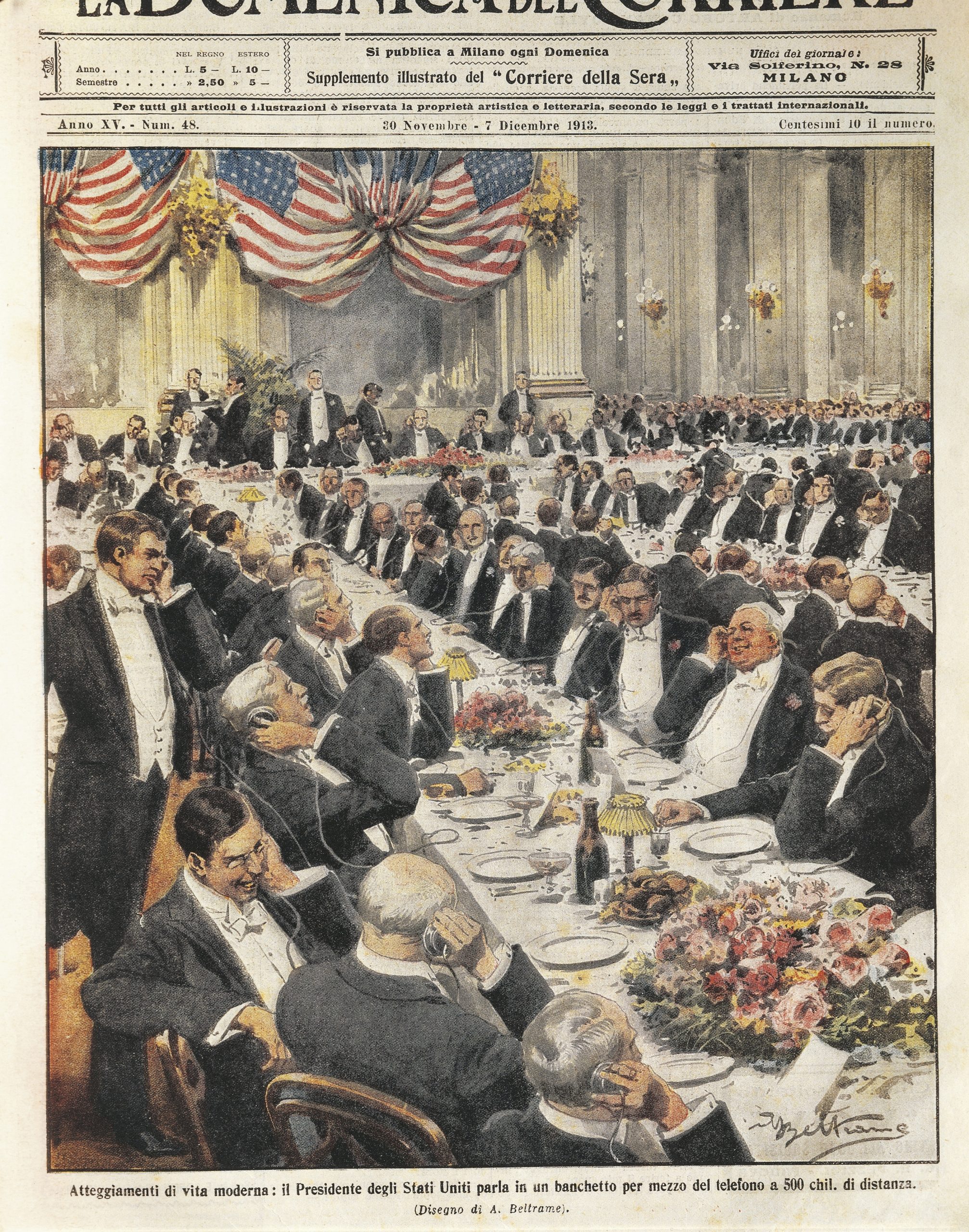 The President of the United States speaking by telephone at a distance of 500 kilometres. Illustration by Achille Beltrame on the Italian newspaper ‘La Domenica del Corriere’, November 20, 1913

President Obama and his advisors have told us that he can work around a purportedly obstructionist Congress by using what they claim is legitimate executive authority exercised by “pen and phone.” The phrase is meant to put across the idea that the president can get things done by signing off on various formal and informal executive initiatives, and cajoling Americans within government and without to act according to his vision. White House advisor Dan Pfeiffer, who is credited with inventing the phrase, recently explicated its meaning by observing that in an era of divided government, a Democratic president cannot easily get his way when Republicans control Congress. In order to “move the ball forward” on the president’s agenda, the deployment of “executive power” is required, according Pfeiffer.

Of course, divided government is a function of the Founders’ separation of powers regime, and it has been under assault by progressives for the past hundred years. Even without government divided along partisan lines, separation of powers is routinely a barrier to the formation and realization of concentrated national ambitions—just as the Founders intended. But one of the touchstones of progressive ideology, expressed by its theorists and practitioners from the early 20th century to today, is that the problems and complexities of the modern American nation require the centralization and expansion of government power.

Concentrated executive power in particular is the thing that has animated progressive presidents from Teddy Roosevelt to Woodrow Wilson to Barack Obama. Wilson, a political theorist before entering the White House, made a scholarly argument that would have shocked the Founders. In his 1887 essay The Study of Administration, he claimed that “There is no danger in power, if only it be not irresponsible. If it be divided, dealt out in shares to many, it is obscured; and if it be obscured, it is made irresponsible.”

Dan Pfeiffer’s amorphous phrase captures various practices through which modern presidents have tried to centralize control over domestic policy formulation and implementation—in effect to lead a system that was designed not to be led by a single person. Since first coming to office, President Obama has been adept at using modern day versions of Roosevelt’s “bully pulpit.” Through the use of rhetoric, social media, and personal contacts, the president has been able, with varying degrees of success, to motivate—and sometimes lean on—individuals, nonprofits, and even private corporations to get behind his agenda. Almost all presidents, since the dawn of the progressive age, have attempted to embrace what political scientists sometimes call the “rhetorical presidency.” But the widespread acceptance of the president as rhetorician and leader of the people, rather than as limited constitutional officer, is itself a reflection of the triumph of the progressive idea.

Perhaps even more troubling than creative new uses for the president’s BlackBerry are the things that he thinks he can do with the stroke of his pen. As he said in January, in the weeks leading up to his State of Union address, “One of the things that I’m going to be talking to my Cabinet about is how do we use all the tools available to us, not just legislation, in order to advance a mission that I think unifies all Americans.” He reiterated the point in the address itself. Leaving aside the likelihood of this increasingly unpopular president knowing what unifies all Americans, there are weighty legal and constitutional objections to this refusal to wait for legislation on the part of a president who, at any rate, has often ignored the text of legislation already passed.

The administration’s seeming alterations to the plain text of the Affordable Care Act –including delaying the employer mandates through the actions of the Treasury Department—have not come in the form of formal executive orders. But they are “pen and phone” examples. (We can see that in fact the coinage arrived pretty late in this process.) Executive action contrary to explicit law is, to put it mildly, constitutionally ambiguous. The Constitution gives to the president the high responsibility to “take Care that the Laws be faithfully executed,” which has long been understood to allow some discretion on the part of the executive branch when it comes to the prosecution of criminal cases. But there is nothing to suggest a president can dispense with or suspend the operation of a law, criminal or civil.

Complex questions of administrative law—that is to say, the extent to which Congress has explicitly or implicitly delegated discretionary implementation powers to the executive branch and its administrative underlings—undoubtedly come into play. But is the executive branch really free to delay changes to the tax code as it sees fit? When it comes to the Affordable Care Act, the administration is clearly pushing the envelope of legitimate legal authority, the evidence being its failure to offer a coherent legal justification for a strategy which many think is designed as much to protect congressional Democrats from electoral blowback in 2014 as it is to ensure the predictable and transparent implementation of law.

In light of this president’s intellectual pedigree, it is likely that low political considerations are given a veneer of respectability in his mind, as well as in the minds of his advisors, by progressive conceptions of a strong executive, and by theories of legal realism that insist that law is, and must be, politics, or at least that legal rules do not determine outcomes. Under the new trope of “pen and phone,” the administration seems destined to continue to push the envelope in all kinds of economic and regulatory matters.

On the most benign interpretation of “pen and phone,” President Obama is simply committing his administration to tweaking laws and promoting policies in a manner that is well within the discretionary powers of the executive branch, which powers are exercised for the sake of alleviating hardships imposed by the law and securing the underlying purposes of the law. But this “benign” interpretation is ultimately more disturbing than the overtly political interpretation.

Before the Affordable Care Act became law, then-Speaker of the House Nancy Pelosi famously said the bill would have to be passed before people could know what was in it. If it was in fact President Obama who did not know what was in it, or how what was in it would impose hardships on the American people, it follows that government is probably too big to be workable, and the rule of law as traditionally understood is impossible. It seems the executive branch will either be forced to do things that are contrary to law and constitutional limits, or the legal justifications for executive action or inaction will be so convoluted, and so deeply buried in law-school libraries, that the executive branch will lose the confidence of the people when it comes to faithfully executing the laws—the people on whose confidence a republican regime of laws must rest. Furthermore, while courts can compel executive agencies to act based on a welter of statutory and case law, they have been reluctant to do so because of the very complexities of the administrative state and the presumptively superior expertise of administrative agencies.

It is high time we recognized that the very size and scope of the administrative state make this sad and politically destabilizing situation inevitable. As James Madison wrote in the Federalist 62:

The internal effects of a mutable policy are still more calamitous. It poisons the blessings of liberty itself. It will be of little avail to the people, that the laws are made by men of their own choice, if the laws be so voluminous that they cannot be read, or so incoherent that they cannot be understood; if they be repealed or revised before they are promulgated, or undergo such incessant changes, that no man who knows what the law is to-day, can guess what it will be to-morrow. Law is defined to be a rule of action; but how can that be a rule, which is little known and less fixed?

Progressivism has resulted in a conspiracy of silence when it comes to the steady destruction of the conditions necessary to preserve the rule of law in a large constitutional republic. It is ultimately up to the citizens to preserve those conditions. They cannot expect courts to do the job for them, for courts have been alternately supine or ideologically committed to allowing the expansion of national powers beyond constitutional limits. Likewise, Congress has been happy to write voluminous laws while washing its hands of the consequences of their implementation, and the Oval Office has not lacked for men whose ambition has expanded in the vacuum created by congressional inattention to detail.

It is we the people who must come up with effective means of constitutional resistance to unconstitutional measures. The casual and cavalier use of the phrase “pen and phone” presents us with the occasion to do just that.

What Do Americans Voting with Their Feet Prefer? Better Public Services or More Cash?

Yesterday’s post, on the seemingly unstoppable growth of federal transfer payments to state and local governments, ended on a question: what happens when both parties to the transaction, the states and the feds confront unsustainable commitments? The brilliant answer our federalism has produced: make yet more unsustainable commitments. Why? Read on to find out.

Finally, a narrative account of the United States for students that comprehends the flaws, but also the greatness, of a self-governing nation.