It took Woodrow Wilson a century and a quarter, and help from Harry Reid, but America now has what Wilson said we needed in 1885: government by a majority party empowered to do whatever it wants to push the country along the paths of progress – just like in Europe. Harry Reid and the Obama Democrats’ unilateral change of rules to make the US Senate run strictly on majority votes simply capped a long process of growth in partisanship that has Europeanized public life in America without changing a word in the Constitution. This is not how Wilson wanted to do it, but the unlovely results are the same. 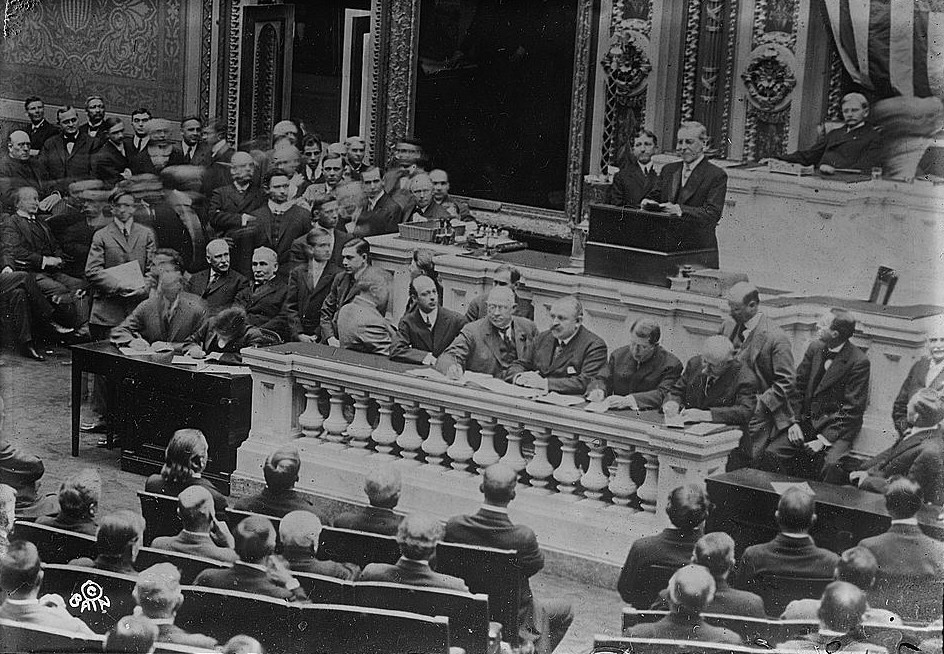 Wilson’s signature work, Congressional Government (1885) argued that the US Constitution’s authors had bequeathed to us a vehicle with too many brakes and steering wheels, but with no driver in charge and not enough horsepower. Whereas James Madison had seen our Constitutional system of checks and balances as means to “refine and enlarge the public view,” Wilson saw it as substituting endless argument and compromise for necessary univocal action. He wrote that our Founding Fathers had done us wrong.

Wilson wanted us to have a parliamentary system with “responsible parties.” Like in Europe, the party that won a majority of seats would vote in unison and wield the power, as the British Jurist William Blackstone had said of his parliament, to do “all that is not naturally impossible” and to test the meaning of that limit as well.

But constitutions and rules were never the main reason why America did not have “responsible parties.” That reason was the diversity of American political life. From the eighteenth century until very recently, all of our political parties were loose coalitions of people who represented countless different kinds of people and interests. Moreover, none of those interests was interested in imposing a comprehensive agenda on the rest. Given that, party discipline could not have existed regardless of legislative or constitutional language.

This began to change after the Civil War, when Southerners, a substantial sector of the Democratic Party, acted in unison to protect their peculiar, embattled model of race relations as well as other interests, and thus made it necessary for the rest of the House of Representatives to observe some degree of discipline. The Senate, by contrast, remained proud of its indiscipline – until now.

Franklin Roosevelt’s “New Deal” put America on the slope to Harry Reed’s imposition of rule by a disciplined majority party because it was the first instance in US history in which a political party tried to impose a new way of life on the whole country. That requires discipline on the part of the imposers and elicited the same from the opponents. Since that time, with few respites, the Democratic Party has presented America with ever-edgier, ever more urgent versions of the same agenda: “new freedom,” “new frontier,” “new foundation,” etc.

Each click of this ratchet required more unison on the part of those who tightened it. Why should anyone be surprised that it elicited a response from the people it squeezed? Newton’s Third Law Of Motion applies to politics as well as to physics. The US Constitution’s words count little against such forces, much less the rules of the US Senate.

We have seen the Constitution’s requirement that all government activities be funded by law negated by the clever device of “Continuing Resolutions.” Why be surprised that a President, abetted by a majority of the Senate, imposes taxes and rules through administrative actions that cannot pass the normal legislative process and then moves to protect his actions by packing the Federal Appeals court that would review those actions? And why should people who are willing to do such things not sweep aside mere rules of the Senate?

Of course, a non-Democrat President and Congress will come along, and soon. Doubtless, they will undo many if not all of their predecessors’ substantive deeds. Probably, they will shove some of their own preferences down their tormentors’ throats. The Democrats’ new tools will be there, begging to be used.

But now, already, American politics has degenerated into competitive throat-shoving. Woodrow Wilson did not think of party government that way. His faith in his own benevolence and in the beneficence of Progress assured him that its beneficiaries would be grateful. But succeeding generations of Progressive rulers, their compassion for beneficiaries having turned to contempt for dependents, have become angry at ungrateful subjects.

Alas, nothing that we, the ruled, can shove down our rulers’ throats can bring back the America they have already destroyed.

Eugenics, American Progressivism, and the ‘German Idea of the State’

How could the very same reformers who fought for "the people," who struggled to help the children and working men, ever have supported eugenics?

An Ever Less Deliberative Body