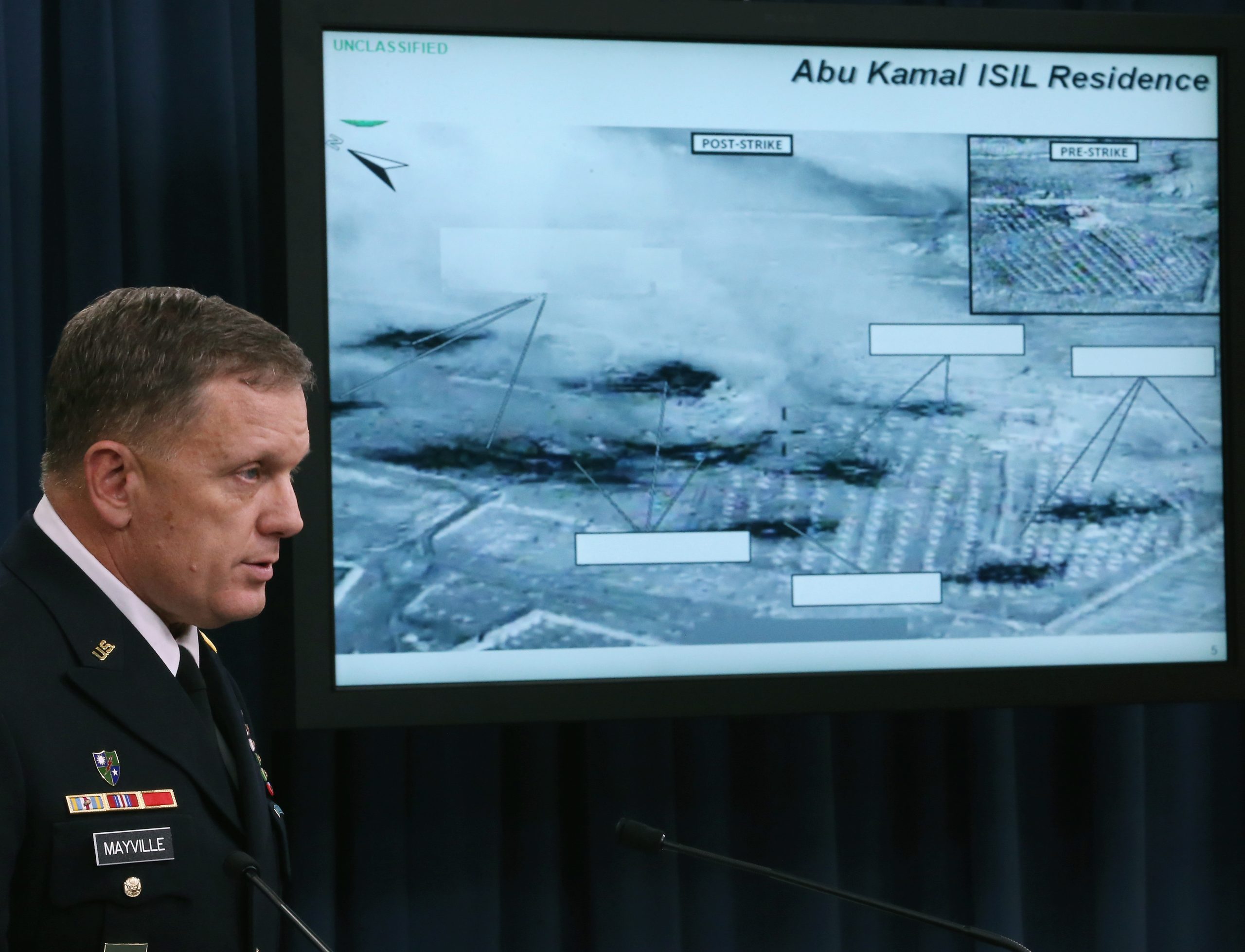 Lt. Gen. William C. Mayville Jr. speaks about the U.S. and Arab air strikes in Syria against the Islamic State in Iraq and Syria (ISIS). (Photo by Mark Wilson/Getty Images)

Ruling class pundits make much of the fact that Saudi Arabia, Qatar, the Emirates, Bahrain, and Jordan have joined the Obama administration’s campaign of bombing the Islamic State. Also noted by the same talking heads is that some 5,000 so-called moderate Syrians are being trained to fight against Islamic State next year. Most admit the obvious: no one can imagine how these air strikes—few, against structures, mostly when these are unoccupied—can inconvenience the Islamic State seriously, never mind destroy. Yes, Sunni Arab counties have decided to take military action against the Sunni Arab Islamic State. But what is consequential about actions that have illusory consequences? What explains our government’s pretense that an alliance to accomplish un-consequential things is itself consequential?A good argument can be made for joining with Saudi Arabia and others in hundreds of daily strikes aimed at everything that moves within Islamic State territory. That, along with other measures, would destroy it surely and quickly. But since the Islamic State is foremost a threat to Saudi Arabia and other Muslim counties, another good argument can be made for the United States to leave them to deal with it in whatever way that events eventually force them to engage this band of butchers. But there is no good argument ­­­for inflicting what Machiavelli called “a little harm” on one’s enemy, or in joining others in doing so.

In a nutshell: to destroy the Islamic State—­­which rules substantial territory and resources with the often enthusiastic consent of the local population—­requires waging war as the dictionary and history define war: enclosing its territory and killing as many of the people within it who fight, or who might fight for it, or who otherwise sustain it, or who are in the way. But the allied governments—each for its own reasons—do not have it in themselves to wage war.

What then explains the formation of this alliance in violation of the maxim to never to do one’s enemies merely a little harm? Its members fear doing what is required to destroy the Islamic State more than they fear that entity at this time. They have allied to evade the problem by using unserious measures to pretend that they are dealing with it. Pretense in the face of a threat (that is, acts of war done in a fragmented manner instead of performed thoroughly, or not at all) never turns out well.

The American people’s overwhelming reaction to videos of barbarians rejoicing in ritually knifing off the heads of their countrymen forced President Obama’s vow to “destroy” the Islamic State. There are sound national security reasons for following this domestic political necessity with decisive military action. The videos invite countless disaffected youth (America has them by the millions) to join in a venture that satisfies their sentiments and that is sanctioned by divine authority. Islam is attractive to such people far less as it relates to God than as it motivates them, as the Koran says, to “torment [the unbelievers] with your hands, humiliate them, empower you over them, and heal the hearts of the believers.” Also, the Islamic State reinforces the spreading sense that it is open season on Americans and that America can be brought low. Its continued existence increases our vulnerability to terrorist groups and would-be terrorists, as well as encouraging major nations to act against us. Sound reasons all for destroying the Islamic State.

Technically, it would be easy for the U.S. government to cut it off from money and all manner of supplies, including food and medicine. As in World War II, our government could foreclose access to global trade for any country that traded in any way with our enemy. Problem is, much of the Islamic State’s money comes from Saudi Arabia, the emirates, and Qatar. Supplies come to the Islamic State chiefly through Turkey. To force these governments to play a useful role in destroying it would take harsh diplomatic and economic compulsion. The ripple effects of that compulsion on American businesses and on the rest of the world would be serious.

Like serious economic sanctions, a serious bombing campaign would hurt people within the Islamic State other than its militants. Obama’s leftist base is aghast at the prospect that U.S. bombs would kill civilians—­ never mind that it is no fault of ours that they are indistinguishable from militants.

The Sunni Arab states, justly terrified by the Islamic State’s appeal to who knows how many of their own youth, nevertheless dread even more what internal reactions they might provoke by making war against it and its extreme version of Islam, which is currently killing many infidels, chiefly Shia. It goes without saying that one powerful interest of the ruling classes in the Sunni Arab world is to balance their un-Islamic lives by contributing money to eliminating infidels, as well as to other Sunni causes. Turkey’s Muslim Brotherhood government, for its part, is in hock up to its ears to these very same Gulf financiers, who are keeping its economy afloat artificially.

This coalition of the conflicted pretends to interdict the Islamic State’s oil revenues by striking a few little refineries, and to hurt it militarily by bombing a few empty buildings at night.

Evading the Islamic State problem by pretense only demonstrates impotence. And that strengthens the enemy and weakens the pretenders.

Cooperative Federalism is the Handmaiden to the Administrative State

Public relations seems to have been the Afghanistan War’s most successful operation.