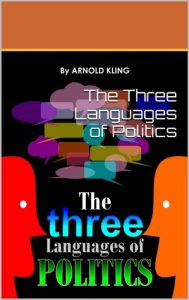 This is the title of an e book by Arnold Kling, who used to blog at our sister site and now blogs at Askblog.  The book, which is well worth reading, argues that conservatives, libertarians, and progressives each have a different language that they use to analyze politics.

There is much to be said for Kling’s argument.  Once you start to think about it, his language view seems quite powerful.  This presentation by Kling about the Three Languages happened to occur a few days after President Trump gave a speech in Poland.  Kling noted that the speech, which had received strong reviews from conservatives, had spoken of the risks to Western Civilization.  This makes perfect sense under Kling’s view.

While I found Kling’s idea quite interesting, I should say that in my own mind all three of these values (as well as others) are important.  I am a consequentialist libertarian.  I start with liberty as the basic building block of good consequences.  But one of the features of liberty is that it allows a sophisticated civilization to grow that is of great value.  And I also believe that liberty greatly helps to prevent oppression and to help the oppressed of the world.  So I care about all of these values, but, as a libertarian, liberty is the basic building block.

Although Kling’s analysis is extremely helpful, I am not sure it really accounts for all of our politics.  While progressives certainly focus on oppression, in my view they are typically statists – that is, they have an unrealistically beneficial view of government power and an unrealistically negative view of markets.  Consider, for example, environmental activists who are a core part of the progressive movement.  The main view here is an anti-market belief that favors strong regulation of the modern economy to protect the environment.  To be sure, there are parts of this view – such as the environmental justice movement, which purports to protect oppressed groups from environmental harm – but this is merely a part of the overall environmentalist view.

The Return of Congressional Government

Libertarians Can Believe in Borders

One can easily imagine a place with immigration limits that would at the same time uphold relatively libertarian principles.

How the British Constitution Created the Brexit Mess

A good compromise on Brexit would require a party system designed to foster agreement, not the government-and-opposition dynamic of Parliament.