While the odds seem stacked against significant change from the rescheduled summit between President Trump and North Korean leader Kim Jong-un, whatever the odds of a positive outcome, they represent an improvement on the status quo. For this, Trump deserves credit. It is difficult to think the summit would be scheduled with any normal politician in the White House.

As I’ve written before, Trump’s base does not support him despite his “craziness,” they support him because of his craziness. Trump’s craziness is the commitment mechanism his voters have been desiring in order to see change in Washington, change long promised by the Republicans but never delivered.

It’s the “craziest” player who wins in games of “chicken,” which is the game the U.S. and North Korea have been playing for decades. The canonical game is well known from the movies. Two boys face each other in their roadsters. At the given signal, they speed toward one another on a collision course. The one who swerves is the “chicken,” the one who does not swerve wins the game. If neither swerves, the cars collide, resulting in injury, or worse, to the drivers.

The figure below sets out the game. There are three (Nash) equilibria to the game, two equilibria in which collision never occurs, and one equilibrium in which collision occurs sometimes. (A Nash equilibrium exists when no player has an incentive to deviate to another strategy given the strategy the other player is playing.) The numbers are there only for concreteness; they don’t represent an objective value, as only the ordinal ranking of the outcomes by the players matter. 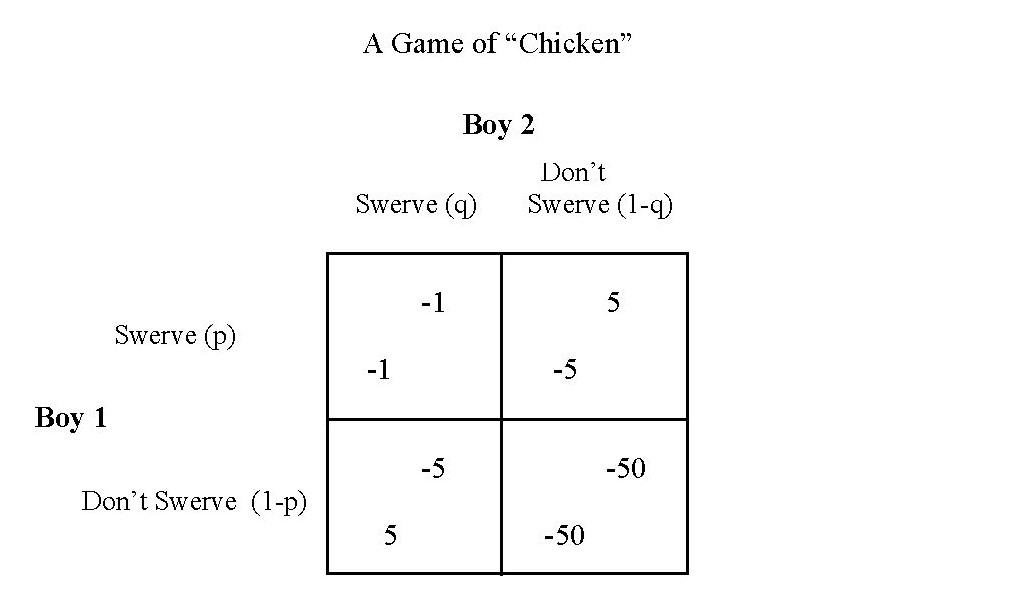 A problem exists with having two or more equilibria in the game, how does one know which player will swerve and which will not?

A player developing a reputation for not swerving can select one of the equilibria as a prediction for the outcome in the game. North Korea and the U.S. have been playing chicken in the decades after the Korean War, typically with the United States “swerving,” playing chicken, to North Korea’s not swerving. (Another solution is having a commitment mechanism, like the doomsday bomb in the film, Dr. Strangelove. The world gets blown up automatically in response to a bomb dropping on the Soviet Union. The dark joke in the film is that the device had not yet been publically announced, and so could not act as a deterrent.)

Changing the outcome of the game from one equilibrium to another when the players have settled expectations of who swerves and who doesn’t is fraught with difficulties. Basically, the traditionally-swerving player needs to work to convince the traditionally-winning player that he’s now the craziest player. While the United States is the player, a new president at the nation’s head provides an opportunity to rework old relationships.

But transitions are fraught with difficulty, and risk. In a game in which it’s all up in the air, the third equilibrium seems to be the most sensible prediction. In this equilibrium, however, both players are playing their strategies probabilistically. That means there’s a chance neither player will swerve, and a head-on collision will result.

Real life games of chicken are much more complicated. But the simple game can provide some insight into what’s going on between Kim Jong-un and Donald Trump.

Kim Jong-un has been used to winning. He has the reputation for not swerving. The strategy has allowed him to get stuff from other nations for himself and his cronies for decades. There was little reason for him to think he needed to change his strategy. Indeed, he likely calculated nuclearization as a step to continue his winning streak.

President Trump steps into this with a similar reputation for crazy behavior. John Bolton helps him with this (writing as late as this last March for the legality of attacking North Korea). This raises the question in Kim Jong-un’s mind: Are Trump and Bolton crazy enough not to swerve?

While potentially risky, Trump’s approach is one of the few that holds any real promise of changing the traditional play of the game. To be sure, if Kim Jong-un were suddenly to become reasonable, or was replaced by someone reasonable, that could change the game to something entirely different.

Absent something that drastic, however, the only alternative to the certainty of the status quo game, that is, North Korea certainly wins and the U.S. certainly swerves, is to mix it all up, intentionally to throw everything up in the air. With Trump, the U.S. now plays the mixed strategy instead of playing the chicken. If he can make Kim Jong-un swerve, then there’s the possibility of a establishing a new play to the game, one in which Kim Jong-un doesn’t habitually roll the U.S.

But what of the possibility of collision as a result of Trump having the U.S. now playing the mixed strategy? The risk is that neither player swerves and there’s a head-on collision. The answer is, better today than tomorrow. A nuclear North Korea with ICBM capabilities does not make the outcome of a chicken game which North Korea wins any better for the U.S., for South Korea, or for the world. It makes it far worse.

So, yes, there’s risk in what Trump is attempting. But the gamble only gets worse for the U.S. and its allies in the future. Having our “crazy” President Trump in charge right now could very well provide the U.S. the strongest hand it will ever have for engaging Kim Jong-un, at least before he becomes even a greater threat.

It might be helpful that President Trump has switched up how the game is played with North Korea.

The Flight of Fancy Election

Coming Out of the Bubble