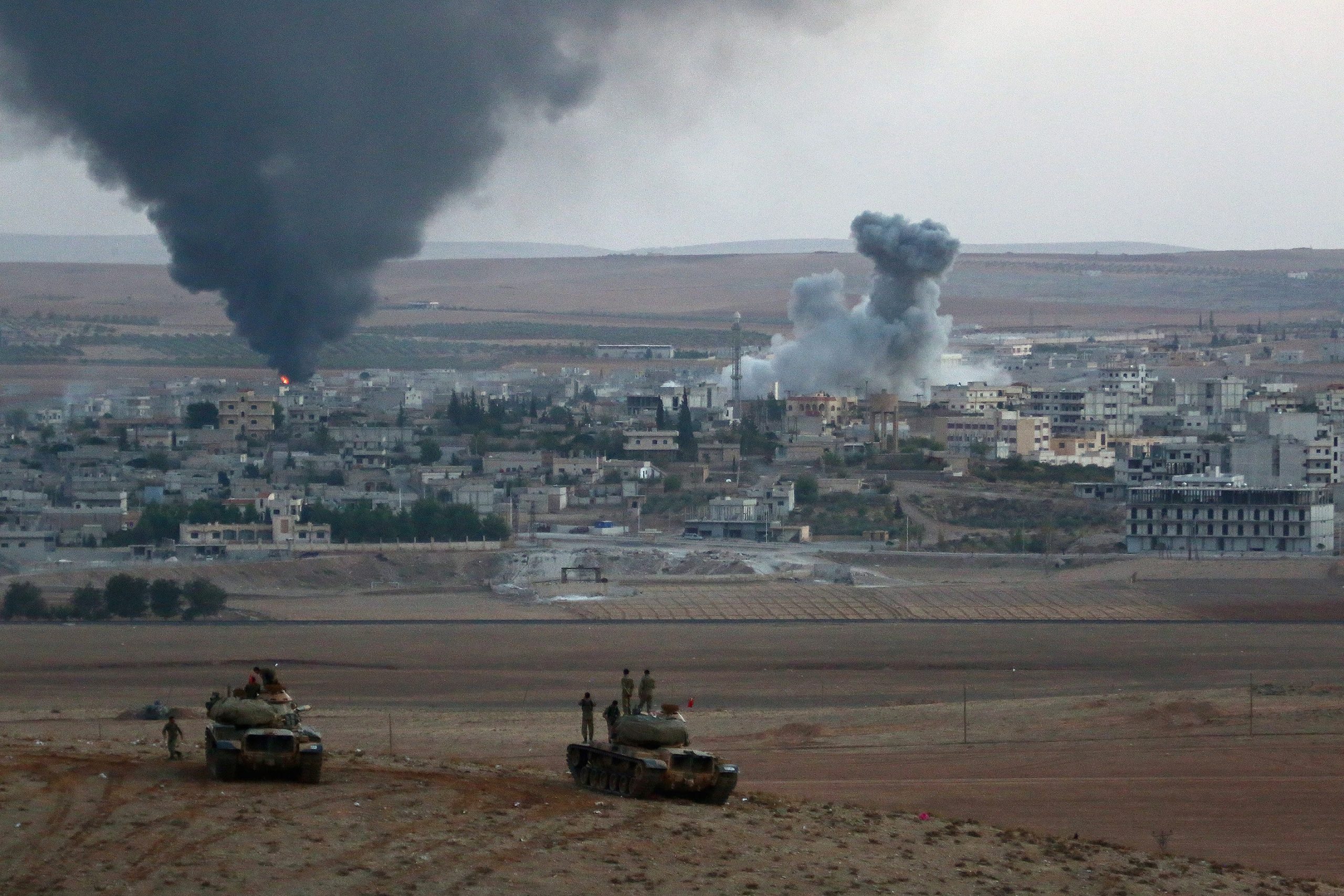 Acting in the manner of sorcerers’ apprentices over several decades, the makers of U.S. foreign policy have contributed to turning many of the tensions among the world’s peoples into disasters. These American-caused disasters diminish the respect for America upon which our own peace depends. The trouble comes not from any errors of detail, but rather from disregarding the fundamentals of statecraft. The remedy lies in paying attention to them. Herewith, a glance at the U.S. government’s responsibility for the disasters now unfolding along the Islamic State’s bloody edges.

For centuries, albeit uneasily, Turks, Kurds, and Arabs had lived alongside one another along the edge of the Fertile Crescent that runs between Anatolia and Mesopotamia. Now, however, we see Sunni Arabs who have carved out a state from what used to be Syria and Iraq, making substantial progress in their effort to annihilate millions of Kurds in ancient communities along Turkey’s southern border. As Turkey’s mighty army watches, riots of resentment among Turkey’s large, long-suffering Kurdish population bespeak an estrangement that may not be reversible.

The radical-Sunni Islamic State’s use of superior weapons – which alone makes it possible for Arabs to make headway against superior Kurdish fighters in defensive positions – is due almost entirely to having captured American equipment from an Iraqi army upon which our government lavished vastly more resources than brains. That, in turn, is due to our bipartisan foreign policy establishment’s enduring, reality-proof commitment to a “united, democratic Iraq,” to be achieved by making nice with its Sunni minority, regardless of its efforts to rule Shia and Kurdish peoples. U.S. sorcerers’ apprentices were surprised and disappointed when the Iraqi government – necessarily led by the massive Shia majority – appointed Shia commanders to the army. They were surprised and disappointed again when Shia soldiers in this “inclusive” army refused to fight to defend regions populated by Sunnis who are friendly to the Sunni Islamic State, in the name of an Iraq in which nobody but the Americans believe. Dismayed to see the Iraqi army’s wonderful American equipment fall into the hands of the Islamic State, the U.S. government now resolves to pour more equipment into that army while making it even more “inclusive” than before.

Meanwhile, the Islamic State moves genocidally against the Kurds – to whom our government has stinted arms lest its formal declaration of Kurdish de facto independence puncture the American pretense of a “united democratic Iraq” and displease the Turkish government. Nevertheless, the United States expects the Kurds to be the most effective ground force against the Islamic State. The Obama administration has undermined its stated intention to “destroy” the Islamic State, by backing it up with air strikes so few and with munitions so light as to destroy, not the Islamic State, but what little possibility existed that the Kurds would ever fight them—that is, unless the Kurds formed an independent Kurdistan. Whatever happens to the many Kurdish communities strung along the northern edge of the Fertile Crescent, all Kurds are now more certain than ever that their physical safety depends on forming their own independent state.

Turkey is sure to incur the biggest direct consequences of this. Turkey’s Kurds are not Turks, in language or in anything else. Since Mustafa Kemal reduced the Ottoman Empire to the borders of present-day Turkey, the Kurds have been the country’s biggest and most restive minority. The Turkish government has dealt with them by ever-varying, never successful, mixtures of violence and attempts at integration. The foreign policy of President Erdogan’s Islamist government, eventuating as it has (whether this was intended or not) in what looks like an attempt to use the Islamic State’s fellow Islamists to kill Kurds, may well have made it impossible for Kurds and Turks to continue to coexist within the same borders.

In a nutshell Erdogan, first as the Prime Minister and later as President, made possible the Islamic State’s growth by letting his country become its main source of supplies (it buys much of its food, for example, in Turkey) as well as the transit route for its rank-and-file foreign fighters. While we cannot know for sure why Erdogan acted as he did, certain facts are suggestive. Erdogan, like many Turks, detests the Alawite dynasty in Syria, of the Assad family. Qatar, which has organized much of the Islamic State’s finances, also has organized the massive, thoroughly opaque, flood of cash that has inflated the financial bubble by which Erdogan has purchased the allegiance of his party’s cadres and the complaisance of countless Turks. Erdogan’s sympathy for radical Islam, from Palestine to Pakistan, is also no secret.

None of this, however, dictates keeping his army watching passively as the Arabs, whom he has facilitated, try to kill Kurds. And yet that is what he is doing.

As support of the Islamic State from Turkey, a NATO member, continues to mock the work of a generation of American policymakers, President Obama has not reversed his description of Erdogan as among his best friends, and continues to treat him as an ally. Obama thereby makes America responsible indirectly for Erdogan’s egregious policies.

In sum, the disasters that now stretch from the Persian Gulf to the Mediterranean and that project violence onto America itself involve so many factions antagonistic to one another, in so many ways that intertwine with, and cut across, one another, that no attempt to sort them out makes any sense. In fact, the beginning of wisdom about this tangle is to recognize that our foreign policy establishment worsened it when, instead of responding to Saddam Hussein’s enmity simply by undoing him – our business – and letting the regions’ locals settle their own affairs, our officials tried to mind others’ business.

Protecting America—as well as ceasing to contribute to harming the locals—requires taking care of our own business. At this point, our chief business in that region is to make sure that anyone’s foremost thought about America is fear of offending us. As ever, utterly destroying enemies and their causes is a firm foundation of peace.

Is the Islamic State Islamic?

We Remember the Genocide — And We Must Avert Another

The history of the Armenian Genocide suggests three lessons for the current situation in the Mideast.

The Sounds of Allied Evasion

The Invasion of Iraq: A Change in My Position