A veritable firestorm has lately erupted in England as a result of that country’s Law Society having issued a set of practice notes advising lawyers on how to draw up Sharia-compliant wills. 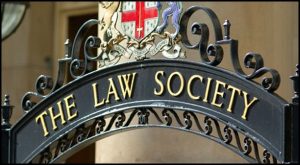 Why publication of these practice notes has proved so inflammatory is because they have seemed to many to betoken official endorsement by the country’s legal profession of inheritance rules that cannot be considered as anything but unfair to women as well as homophobic.

Many consider the inheritance rules unfair to women because they allocate them a smaller share of the estates of deceased male relatives than these rules allocate correspondingly close male relatives. Many consider the inheritance rules also homophobic because they forbid all gay progeny from inheriting any part of the estates of their deceased parents.

Baroness Caroline Cox, who leads a Parliamentary campaign to protect women from religiously sanctioned discrimination, has condemned the practice notes. She has declared of their publication:

This violates everything we stand for. It would make the Suffragetes turn in their graves… Everyone has freedom to make their own will and… let those wills reflect their religious beliefs. But to have an organisation such as the Law Society seeming to promote or encourage a policy which is inherently gender discriminatory in a way which will have very serious implications for women and possibly for children is a matter of deep concern.

Some MPs have called for a joint investigation by the House of Commons Justice and Home Affairs Committees of how widespread the implementation of Sharia is in Britain.

Another former MP has described the practice notes as ‘utterly unacceptable’, remarking of them: ‘There could not be a clearer case for ministers and government to step in than the Law Society’s breathtakingly sexist Sharia law guidelines.’

Meanwhile, the executive director of the National Secular Society has also condemned their publication, saying of them:

This guidance marks a further stage in the British legal establishment’s undermining of a democratically determined human rights-compliant law in favour of religious law from another era and culture… Instead of protecting it, the Law Society seems determined to sacrifice the progress made in the last 500 years.

In an op-ed in the Daily Telegraph entitled ‘Sharia rules have no place in British justice’, a solicitor who is a member of the Lawyers’ Secular Society has criticised the Law Society for issuing the practice notes, observing of them:

There seems to be no recognition of the fact that solicitors are being asked to use and accommodate instructions that, in any other circumstances, would be socially unacceptable… This… legitimises a discriminatory practice that, without this guidance, clients may have been embarrassed to ask about. The Law Society’s endorsement normalises it and makes it acceptable. That, in turn, will make it easier for calls to be made for such rules to be formalised, thereby opening the way to sharia to permeate other areas, such as family law. The guidance should be withdrawn.

I cannot for the life of me see what is wrong with the Law Society having issued the practice notes, or why, in publishing them, it should be thought to have endorsed, legitimised or normalised the inheritance rules that they seek to enshrine.

Since it is already perfectly lawful in England for Muslims to draw up wills that accord with Sharia and since its rules governing inheritance are very complex indeed, there is every reason why the professional body charged with the education of lawyers in England should have wished to enable them to do their job effectively by issuing the practice notes it has.

Whether Muslims should be able in English law to discriminate in their wills against any gay offspring of theirs or disburse their assets in ways that leave their female relatives less than they do their male ones is an entirely separate matter. To suggest Muslims alone not be able in law to do so, while others can, would amount to unacceptable discrimination against them. To prohibit all from being able to would amount to an equally objectionable intrusion into private property rights.

Just as gays and lesbians should be entitled in law to leave their entire estates to other gays and lesbians if that is what they want to do, so should Muslims also be entitled to bequeath their estates as they wish in conformity with Sharia inheritance rules, provided that how they choose to do so does not deprive those whom English law considers have a legitimate claim against them of any part of it. Under the terms of section 1 of the Inheritance (Provision for Family and Dependants) Act 1975,

As to the contention that Sharia unfairly discriminates against women in prescribing that they should receive a smaller share of the estates of deceased close relatives, one should consider alongside those inheritance rules other legal requirements in Sharia concerning what women are entitled to receive from their husbands at marriage and upon their demise. For they put an entirely different complexion on Sharia inheritance rules, as other provisions in it do pertaining to the property rights of women. For anyone genuinely interested in the subject, I would recommend an excellent article on the subject that appeared under the title ‘Shariah-Compliant Wills: An Overview in the January/February 2011 issue of the journal Probate & Property.

Written by New York City attorney Omar T. Mohammedi, among the many insights contained in the article is the following one. Those who claim Muslim women are unfairly discriminated against by Sharia inheritance rules would do well to dwell on it before repeating the charge:

Spousal shares under a Shariah will are frequently less than one-third of the estate, which contradicts the spousal right of election that most [US] states have adopted… to protect a spouse… [from being] cut out… [by] the other spouse of property that the two acquired during the marriage. This falls generally within the American principle that marriage is an equal partnership, whereby both spouses… should… receive equal benefit. In the Islamic context, however, a wife’s property belongs to her alone, while the husband’s property is communal, to be used for the benefit of the family as a whole. In this spirit, Shariah law entitles women to a lesser share because no financial burden is placed on the wife.… Therefore, although Shariah law results in a smaller portion of the inheritance for a wife when compared to the spousal right of election, this difference is offset by other rules and requirements under the Shariah that provide sufficient protection for female relatives.

The same cannot be said of gay offspring whom Sharia stipulates should inherit nothing from the estates of deceased parents. However, so far as I am aware, nothing in Sharia prohibits any Muslim parent who wishes from giving any gay progeny of theirs as much as they want to while still alive. Hence there are ways and means for such Muslims as might wish to do so to make provision for any openly gay children they have.

Doubtless, such issues could be explored by such parents with their lawyers when they come to draw up their wills.

In conclusion, I would argue that the Law Society has done nothing wrong whatsoever in issuing the practice notes it has. Nor need Muslims in drawing up their wills in accord with the guidance they provide.

Creating a Liberal Islam: The Story of Maajid Nawaz

American Muslims, by creating organizations and assuming leadership within their communities, reinforce the United States’ identity as a religious nation.