American conservatives have long argued that the judiciary should defer to the elected branches of government on matters of policymaking, correctly observing that the practice of judicial deference dates to the founding of the nation. Even those founders who favored a somewhat “elastic” interpretation of the Constitution condemned the notion of “legislating from the bench.” As Alexander Hamilton noted in Federalist #78, the judiciary possessed neither the purse nor the sword, and would retain its legitimacy due to the fact that judges possessed little discretion and were required to follow precedent, all the while observing a strict separation from the elected branches of government.

It is important to keep this in mind in light of the recent National Security Agency surveillance “scandal” which has led to calls for increased judicial oversight of the nation’s intelligence community. These calls, unfortunately, are not coming solely from the usual liberal suspects, but from conservatives who proclaim their devotion to the Constitution. This is an unfortunate turn of events, for if legislating from the bench is inappropriate in the domestic arena, it is completely unwarranted, and altogether dangerous, in the national security arena.

This newfound appreciation for judicial activism from normally sober-minded conservatives can be seen in Senator Rand Paul’s (R-KY) and Representative Justin Amash’s (R-MI) proposal that class action lawsuits be filed against the National Security Agency in order to alter its practices. Paul recently announced that he would challenge “this [NSA surveillance] at the Supreme Court level. I’m going to be asking all the Internet providers and all of the phone companies, ask your customers to join me in a class-action lawsuit. If we get 10 million Americans saying ‘We don’t want our phone records looked at,’ then somebody will wake up and say things will change in Washington.” A program authorized by Congress, managed by the executive, and sanctioned by the FISA court will now be challenged by a class action lawsuit, mimicking the traditional liberal tactic of going to court when you cannot prevail in the political process. 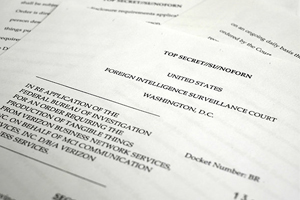 Additionally, Senator Patrick Leahy (D-VT), a longtime critic of the American intelligence community, has sponsored legislation with Senator Mike Lee (R-Utah) to “increase judicial review” of terrorist related surveillance requests. The FISA Accountability and Privacy Protection Act of 2013 would, as its sponsors put it, add more “meaningful judicial review” of requests by the government to intercept suspected terrorist communications. On top of this, President Obama has proposed that a “special advocate” be appointed to serve as an adversary to the government in FISA court proceedings. In other words, government officials will have to joust in front of a judge with a lawyer concerned about the civil rights of a suspected Al Qaeda sympathizer living in the United States. While it is not surprising that President Obama and Patrick Leahy would adopt these positions, it is surprising to see prominent Republicans, including potential 2016 GOP nominees, jumping on Pat Leahy’s bandwagon.

Terrorist attacks directed from abroad are acts of war against the United States, requiring a response by the nation’s armed forces under the direction of the commander-in-chief. Unity in the executive is critical to the conduct of war, as Alexander Hamilton noted in The Federalist, and war by committee, especially a committee of lawyers, brings to armed conflict the very qualities that are the antithesis of Publius’s “decision, activity, secrecy, and dispatch.” The American military, with the assistance of the American intelligence community, fulfill the constitutional mandate to provide for the common defense. The nation’s defense establishment is not the Internal Revenue Service or the Department of Health and Human Services; if one dislikes the social welfare policies of the Obama administration or disagrees with President Obama for whatever reason, that is all well and good, but true conservatives should reject the principle that judicial review is applicable to the conduct of national defense. The founders understood that the decision to use force, the most important decision any government can make, were non-judicial in nature and were to be made by the elected representatives of the people.

Nonetheless, for those weaned during an era when “privacy” was elevated to the be-all and end-all of the American experiment, the war power and related national security powers granted by the Constitution to the elected branches are trumped by modern notions of a limitless “right to privacy.” The civil liberties violations of the War on Terror are considered so egregious as to require the intervention of an appointed judiciary lacking any Constitutional mandate, and lacking the wherewithal, including information and staff, to handle sensitive national security matters. This is judicial activism at its worst and further evidence that the “political questions doctrine,” the idea of deferring to the elected branches of government on matters falling under their constitutional purview, is, for all practical purposes, dead (See the case of Totten vs. U.S., 1875, for an example of judicial deference to the elected branches on intelligence matters. This deference persisted until the late 20th century). Simply put, according to the Constitution and to almost 220 years of tradition, Congress and the President are constitutionally empowered, among other things, to set the rules regarding the measures deemed necessary to gather intelligence and conduct a war.

One of the latest demands from advocates of increased judicial oversight is for a “targeted killing court.” In a similar vein, Senator Marco Rubio has called for the creation of a “Red Team” review of any executive targeting of American citizens, which would include a 15 day review process – “decision, activity, secrecy, and dispatch” be damned. A 15 day review process of targeting decisions would horrify Alexander Hamilton and all the framers of the Constitution. No doubt our 16th President would be horrified as well – imagine Abraham Lincoln applying for targeting permits on American citizens suspected of assisting the Confederacy. (“Today, we begin a 15 day review of case #633,721, that of Beauregard Birdwell of Paducah, Kentucky.”) War by lawyer might in the not too distant future include these types of targeting decisions, followed by endless appeals to unelected judges. All of this is a prescription for defeat.

We are, sadly, almost at this point, for a new conception about war and national security has taken root in our increasingly legalistic society. We saw this during the Bush years when the Supreme Court for the first time in its history instructed the executive and legislative branches on the appropriate manner of treating captured enemy combatants. The Courts are now micromanaging the treatment of detainees at Guantanamo, to the point of reviewing standards for groin searches of captured Al Qaeda members. True conservatives understand the pitfalls of this legalism, especially of the ill-defined international variety. Conservatives should be especially alert to the dangers arising from elevating international law over the national interest as the standard by which to measure American conduct.

The legalistic approach to the war on terror now being endorsed by prominent conservatives would cede presidential authority to executive branch lawyers and to their brethren in the judiciary who are playing a role they were never intended to play. Michael Scheuer, the former head of the CIA’s unit charged with tracking down Osama bin Laden, observed that “at the end of the day, the U.S. intelligence community is palsied by lawyers, and everything still depends on whether the lawyers approve it or not.” This is as far removed from conducting war, as Hamilton described it, with decision and dispatch, and with the “exercise of power by a single hand,” as one can get. War conducted by the courts is not only unconstitutional, it is, to borrow a phrase from author Philip K. Howard, part of the ongoing drift toward the death of common sense.

War by Fiat: A Response to Stephen Knott