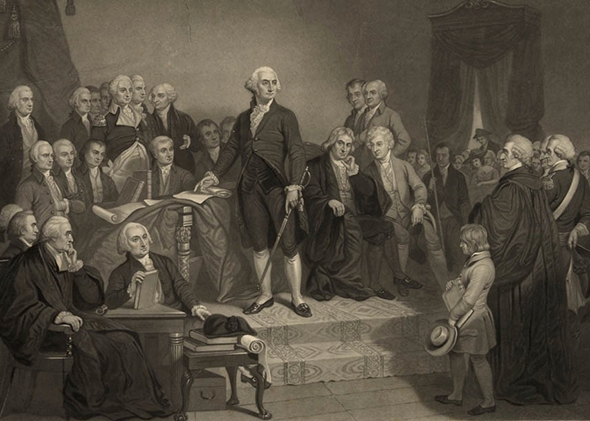 So this is really interesting:  The Court, according to John McGinnis, doesn’t really deliberate about the law when it comes to high-profile cases. It functions instead as a “cognitive elite”— the aristocratic part of a mixed regime.  It’s job, I guess, is to supply wisdom and virtue to counter popular and legislative ignorance and expediency. First off: I don’t know about the virtue part; after all, they were trained to be lawyers and not philosopher-kings. And if what they were doing were “cognitive” in the sense of listening to reason, why do they so often divide 5-4 on the high-profile cases? All reasonable men and women should assent to the truth. when they hear it.

Now, Justice Scalia has complained that the Court too often bows to an elite that’s not mainly cognitive, but one that’s fashionable and, well, just elitist. And we can add that the reason that there is such a strong conservative faction on the Court right now is appointments by the Republican presidents who pledged to reverse judicial activism, which mainly means reversing Roe v. Wade. In this respect, some of the members of this judicial “cognitive elite” were appointed to serve as anti-elitists, to protect popular deliberation against the soft tyranny of schoolmarmish “experts.”

Scalia referred to the elitism that dominates the teaching and culture of our leading law schools.  To some extent, it’s been contemptuous, in the manner of John Rawls, of the ordinary middle-class morality that governs the fairly unregulated market. To a greater extent, it’s the elitism of political correctness that elevates the various forms of personal identity politics over even Rawlsian social justice. In both cases, it would be a reach to identify such elitism with the genuinely aristocratic concerns of either wisdom or virtue; it’s the privileging of the interests of one class over that of another.

We professors of political philosophy, from our highly aristocratic view, don’t think either the Rawlsianism, on the one hand, or the libertarianism, on the other, that are the theoretical foundations of our legal education are capable of pointing our best and brightest students of law in the direction of either philosophy or responsible statesmanship. We even see that the differences between Rawls and, say, Nozick or Epstein are pretty much over details; neither side in that friendly disagreement comes anywhere near ascending to the philosophical heights of our most genuinely aristocratic founders.  But don’t take this criticism very seriously: Nobody really thinks that the point of law school or a legal career is to produce philosopher-kings, and I hope nobody really thinks that our founders thought our justices are supposed to function that way, at least on a regular and predictable basis.

Our most highly cognitive elite, in any case, resides these days in Silicon Valley and believes in a mixture of techno-liberation, crony capitalism, and anti-biological cultural radicalism (that points in the direction of of transhumanism). There’s inconsistent evidence that the Court is lurching in its direction. If it does lurch in the Silicon Valley direction or in that of our politically correct elites, it lurches away from the classy (because classical) aristocratic morality that ennobled our leading founders—beginning with George Washington.

The Judicial Dilemma of Originalism

Trump and PC Leaders: Peas in a Pod

Diversity Bureaucracies are a Cancer on the Modern University