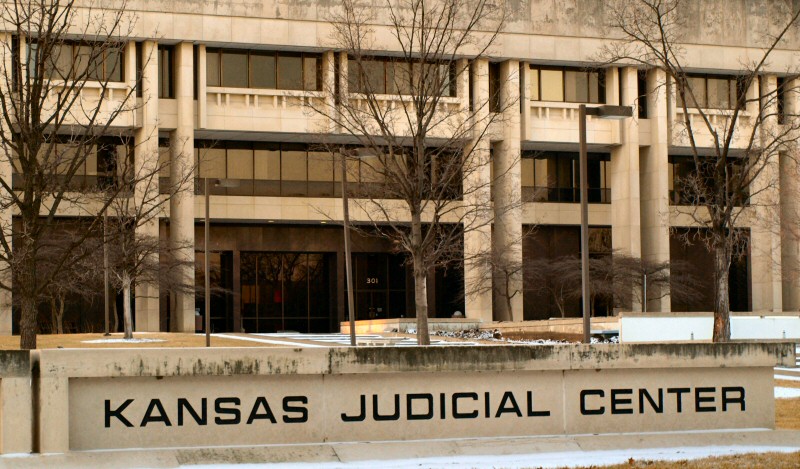 A Kansas court has just ruled that it would be unconstitutional under that state’s founding document to spend $548 million on police, infrastructure, health care or welfare. The court’s ruling does not explicitly disclose this, of course, nor will the judges on the panel admit it. But this is what happens when judges, who reside in a magical, apolitical world shorn of scarcity and therefore tradeoffs, mandate hundreds of millions of dollars in new education spending: The money comes from someplace else.In the real political world, where resources are finite, spending several hundred million dollars on education requires extracting them from either other programs or the state’s economy through taxation and borrowing. In either case, a court ordering such a decision makes the wholly political choice not to spend those resources in other areas.

This may, as a matter of policy, be a defensible choice. Schools in Kansas may be intolerably underfunded. But the month before the district court’s ruling, the state held a gubernatorial election that was largely a referendum on recent budget priorities, and the advocate of steep budget and tax cuts—Governor Sam Brownback—won. Consequently, what is at stake is not the extent of spending on education but the extent of popular control of political choices.

The district court’s ruling in the case, Gannon v. Kansas, applies an interpretation of the Kansas Constitution set forth by the state Supreme Court in the same case earlier last year. It was bad law and worse constitutionalism. The ruling hinges on the word “suitable” in this passage from Article Six of the state constitution: “The legislature shall make suitable provision for finance of the educational interests of the state,” interests earlier defined as “intellectual, educational, vocational, and scientific improvement.”

Kansas’ high court understands “suitable” to impose a substantive obligation to allocate education funds meeting standards of both “adequacy” and “equity.” These standards are themselves muddled. Adequacy is defined in terms of Kentucky’s Rose standards, which emanated from the pedagogically expert pens of that state’s Supreme Court. As to equity, might not such goals as “scientific improvement” require investing—the horror, the horror—inequitably, in the best and brightest or, conversely, in those who face the most formidable barriers?

The larger problem arises from combining this substantive obligation of “suitability” with the assumption that the authority to judge whether education funding is thus “suitable” is solely judicial. The Supreme Court of Kansas, less bashfully than its national counterpart, arrogates this authority to itself entirely. It announces at the outset of its Gannon opinion that “[d]etermining whether an act of the legislature is invalid under the people’s constitution is solely the duty of the judiciary.”

Are legislators and governors wholly excused? Apparently not, since the oath they take upon entering office pledges their fealty to “the constitution of the United States and the constitution of the state of Kansas. . . .” For his part, James Madison, commenting on Jefferson’s draft constitution for Virginia, said allowing the judiciary to pronounce last and finally on constitutional questions—precisely the power the Kansas court claims for itself—“was never intended and can never be proper.” For theirs, the justices of Kansas say that assigning themselves this duty—predictably, they are able to cite the authority of other courts citing other courts assigning themselves similar duties—say this is a matter of separation of powers. So the separation of powers, which was intended to preserve each branch in its own function, now requires the judiciary to perform a legislative one?

Even if the Kansas Constitution’s simple call for “suitable” funding implied a tall hurdle, which is unclear at best, it would not follow that the judiciary should be the arbiter of it. The mere presence of a word in a constitution does not confer all the substantive authority that word implies on the courts.

For confirmation of this, Kansas justices might look to their national forebear John Marshall, neither shy nor retiring in assertions of judicial power, who could have taken a similar tack in McCulloch v. Maryland. The issue at stake in that case was whether chartering a national bank was a “necessary and proper” exercise of Congressional authority under the language of the Constitution.

On the theory of judicial power propounded by the Kansas court with the term “suitability,” the addition of the word “necessary” to Article One, Section Eight, should confer on the courts both the right and the duty to determine which legislative powers meet that test. Marshall disagreed. “Necessary” inherently involving political discretion, and political discretion inherently being a prerogative of the legislature, he concluded:

If a certain means to carry into effect of any of the powers expressly given by the Constitution to the Government of the Union be an appropriate measure, not prohibited by the Constitution, the degree of its necessity is a question of legislative discretion, not of judicial cognizance.

So it is, or ought to be, with “suitable.” Instead, the Kansas Supreme Court’s leap from one questionable premise—that “suitability” codifies everything from equitable financing to the Rose standards—to another, that the presence of such a standard in the Constitution makes the judiciary the arbiter of the adequacy of education funding, illustrates the particular problem of assigning judges political tasks.

Judges judge. They decide cases in front of them, one at a time, each on its merits. They do not have to worry that spending a dollar here requires a cutting or raising a dollar there. Indeed, they do not even have to worry about the fact that, say, the Kansas Constitution requires “suitable” financing for education but also that the state “shall” foster and support “[i]nstitutions for the benefit of mentally or physically incapacitated or handicapped persons” and that its counties “shall provide, as may be prescribed by law, for those inhabitants who, by reason of age, infirmity or other misfortune, may have claims upon the aid of society.”

Amid conditions of scarcity, which is to say amid the human condition, these goals conflict. A dollar spent on education is unavailable to those whose misfortune creates claims on society’s aid. One allocated to people with disabilities is one unavailable to education. Judges are neither competent nor democratically authorized to balance these allocations, and the state’s Constitution cannot conceivably be meant to have transferred such choices to them.

Nor are judges, whose expertise is the law, competent to assess the intricate economics of school finance, the particular tradeoffs interior to school funding (page 44 of the district court’s opinion worries about the insufficiency of professional development funds in areas outside reading, writing and arithmetic), or ascertaining the relationship between school funding and learning.

Of course, it helps if judges are contemptuous in addition to commandeering, as in this gem from page 91 of the district court’s opinion, which asserts the inadequacy of current school funding in Kansas: “[N]o evidence, other than that previously rejected by us, was offered to the contrary.”

The rejection of evidence with which they disagree might spare the judges consideration of facts such as the irony that two events coincided in 1966: Kansas amended its state Constitution to require “suitable” education funding, and James S. Coleman published his definitive study (link no longer available) shredding the relationship between school resources and academic achievement.

Never mind: The court has determined that per-pupil spending is inadequate. The cost of a remedy has been estimated at between $548 and $771 million, at a time when the state is already looking at a $648 million deficit. This is tantamount, again, to a declaration that spending that money on anything else—including items also constitutionally mandated, such as care for the needy—would be unconstitutional.

This is different from saying what may be true, which is that spending those sums on anything else would be unwise. Current levels of financing may well shortchange Kansas children. As Walter Olson has argued, that is up to their parents, not judges, to decide.   Their parents, acting through their representatives, can make tradeoffs, set priorities and gauge the level of taxation the state can bear. Judges, acting in the isolation of each case, are freed from those burdens.

The situation in Kansas, which could be rectified by a proposed constitutional amendment clarifying that suitability is a legislative question, supplies a reminder that one of the most indispensable skills in politics is losing gracefully in the political realm—where one can live to fight another day—rather than running to the judicial sphere for relief. It is a lesson that should caution libertarians and many conservatives against overindulging the growing appetite for judicial resolution of political questions.

The Constitutional Morality of Restraint

Defining Judicial Power I: From “Merely Judgment” to “Force” and “Will”