Several commentators have noted the recent dictat from the (so called) Justice Department advising that, “Schools also violate Federal law when they evenhandedly implement facially neutral policies and practices that, although not adopted with the intent to discriminate, nonetheless have an unjustified effect of discriminating against students on the basis of race. The resulting discriminatory effect is commonly referred to as ‘disparate impact.’” Moreover, the decree goes on to say, “Examples of policies that can raise disparate impact concerns include policies that impose mandatory suspension, expulsion, or citation (e.g., ticketing or other fines or summonses) upon any student who commits a specified offense.”

John Steele Gordon notes some of the problems with this declaration. (I would call it a law if Congress had passed it):

In other words, punishment for bad behavior must be meted out according to racial quotas. If the school is one-third black, one-third white, and one-third Asian, then each racial group must receive one-third of the punishments. If two-thirds of the infractions are committed by one racial group, then so what? That’s discrimination and discrimination violates federal law.

This approach to school discipline is a direct attack on the rule of law. 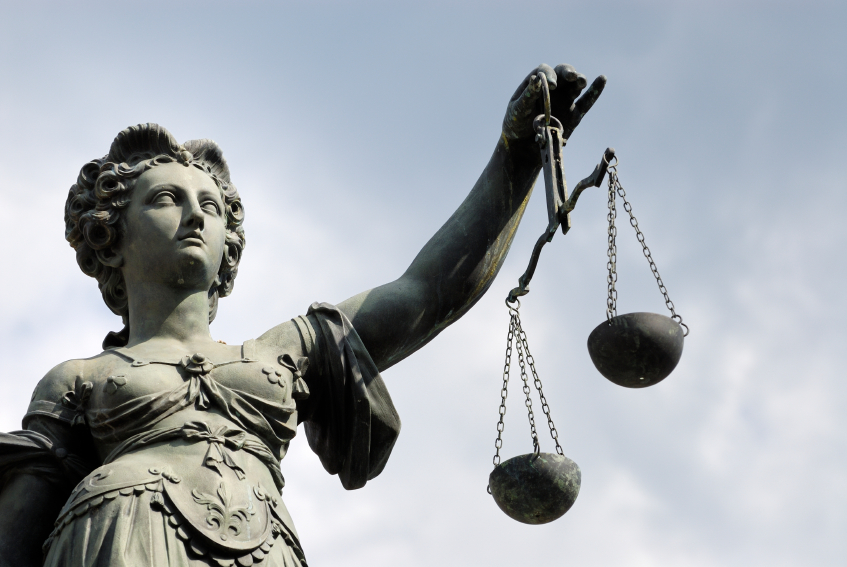 Lady Justice is blind. She does not care about the race, color, creed, religion, wealth, smell, or taste of those before her. Our Justices take that idea very seriously. In the U.S. a judge is bound by oath to do that:

I, do solemnly swear (or affirm) that I will administer justice without respect to persons, and do equal right to the poor and to the rich, and that I will faithfully and impartially discharge and perform all the duties incumbent upon me under the Constitution and laws of the United States. So help me God.

That language almost certainly goes back to Leviticus, 19:15. As the King James Bible renders it: “Ye shall do no unrighteousness in judgment: thou shalt not respect the person of the poor, nor honour the person of the mighty: but in righteousness shalt thou judge thy neighbour.” The language is the language of the rule of law. The rule of law means that the same law applies to each of us, regardless of who our parents are, or our race, creed, religion, etc. Nowadays, some of our elites think that members of groups that have suffered in the past should be given special treatment. There may be a reasonable case for that, in some situations. But that is not the question here.

When meeting out punishments for crimes, we must all be treated as equals, or we will cease to be a republic of laws, and will become a republic of men–the men who decide who belongs to what group, and what its quota of justice is. It is no surprise that “love thy neighbor as thyself’ occurs only three verses later in Leviticus. Applying one legal standard to all men, rich or poor, is fundamental. It might be that those who work in our schools have, sometimes, failed to enforce the law equally. But to demand statistical quotas as a remedy undermines the rule of law. Moreover, the idea that a mere statistical disparity is proof of malice is a dubious proposition at best. To prove actual malice is, of course, difficult, but to remove the presumption of innocence simply because the numbers skew a certain way is deeply problematic.

In his book, Rule of Law, John Philip Reid describes the surprise some Leftist scholars have had when studying our legal history. It turns out, Reid notes, that judges followed “rules and norms, even when those rules and norms went contrary to their personal political preferences and prejudices.” Many of the deacons of our legal academy see it differently. Reid quotes a Harvard law don saying, “I do not see how a man of the Left can describe the rule of law as ‘an unqualified good,’” since the formal rules, designed by the powers that be, inevitably discriminate against some. Who else, we may ask, is going to write the laws? Those with less power? It might be that the best we can do is to create a culture, or to sustain an already existing culture, in which, as one Reid quotes points out, “Judges who bypassed the law risked losing the respect of the bar,” and their own “professional self-esteem.”

Attorney General Holder, and many of the lawyers who hold office for life, and who write so much of our legal code (a post-modern aristocracy?) seem to come from the Leftist law tradition, which holds that law is an instrument of power, and he, therefore, wields it to help a group that has suffered great injustice in the past and that, coincidentally, votes in overwhelming numbers for his party. Others, as those following the IRS scandal know, have not been so lucky. It might be the case that they feel free to make special efforts for their preferred groups precisely because they think of their view as that of a small minority, allowing the mainstream to continue upholding the rule of law, even as they seek to remedy what they think are formal defects. Their assumption may not be correct, particularly if one considers our institutions of legal education and our lifetime officeholders. Recall this bit from Illiberal Education

When the University of Pennsylvania recently announced mandatory “racism seminars” for students, one member of the University Planning Committee voiced her concerns about the coercion involved. She expressed her “deep regard for the individual and my desire to protect the freedoms of all members of society.” A university administrator sent her back a note, with the word “individual” circled and the comment, “This is a RED FLAG phrase today, which is considered by many to be RACIST. Arguments that champion the individual over the group ultimately privilege the ‘individuals’ who belong to the largest or dominant group.” (Dinesh D’Souza, Illiberal Education (New York: Free Press, 1991), 9-10.

The lawyers in Justice department see things the same way. Many of them probably learned precisely that lesson at our elite schools.

The way this decree has been made is also worrisome. In some ways this appears to be a return to the old regime. Before the American Revolution, England’s Courts were, formally speaking, “executive courts.” Justices had the power of magistrates, to enforce the law. Similarly, the King could ask the Court for advisory opinions before cases arose. The U.S. Constitution was built upon a different foundation. In the modern era, however, when executive agencies often possess the power of writing law, enforcing it, and judging, the Justice Department seems to be reclaiming those kingly powers for itself.

To return to the subject immediately at hand, this decree represents a mindset that is disturbing. It reflects a Justice Department that is turning away from the idea of our republic as a nation of equal citizens. On the contrary, it reflects a view of the republic in which how justice is administered depends very much upon who one’s parents are. Beyond that, it represents an America of hyphenated citizenship, in which we relate to government through our group, tribe, or clan, and the justice of our system is evaluated by how well it treats each group. This form of republic reminds one of the clannish republics of medieval Italy. It is a move away from a republic of equal citizens who enjoy the rights of men, and who create government to protect them. In their latest dictat, the Justice Department is importing the “diseases most incident to republican government” into our schools. It is treating citizens as if they, by birth, belong to particular factions. Left in place, such policies will, in time, teach the rising generation that they are members of groups first, and not American citizens first. Down that road lies a new and different republic.

There’s No Such Thing as a Constitutional Free Lunch

The Artifice of the Rule of Law