Professor Ross Davies has a cool new article in the Green Bag, titled “Extrajudicial Reticence: Nine Justices Take a Brief Break from Constitutional Commentary.” Davies draws attention to a curious episode in Supreme Court history, where Life Magazine asked each of the Justices to write a commentary on one of the Amendments in the Bill of Rights. Davies notes that for, perhaps the first and only time ever–briefly in 1991–the Justices decided not to weigh in on the Constitution outside the Court.

In a reply to Life Magazine, Chief Justice Roberts declined the request. He wrote:

“I have taken up your proposal with my colleagues, and we are all of the view that it would not be appropriate for us to undertake the sort of writing which you propose. We are constantly engaged in deciding what the various provisions of the Bill of Rights mean in case which come before us, and we think that our interpretations of these amendments should be confined to that sort of effort.” 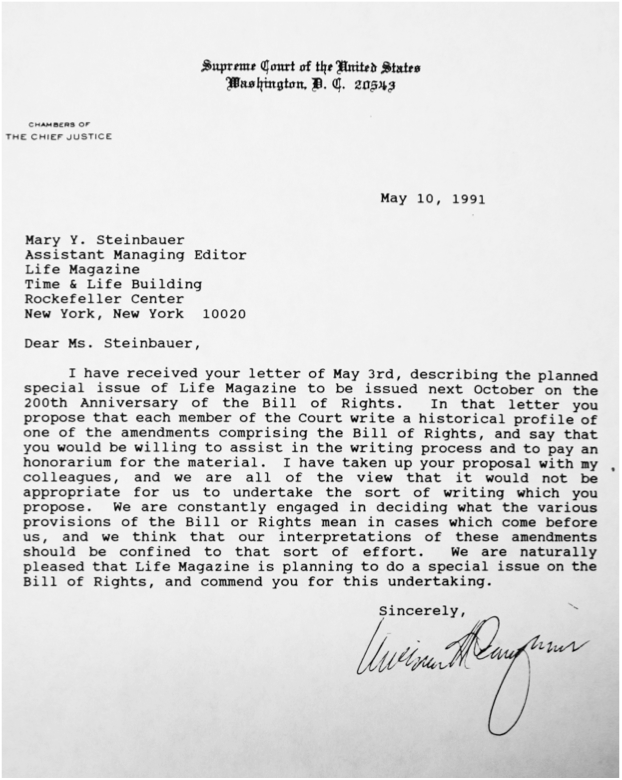 I tend to agree with Chief Justice Rehnquist here–and presumably with his colleagues who signed off on this message. Though, Chief Justice Rehnquist, Justice Stevens, Justice O’Connor, Justice Scalia, and several other of the Justices conferred may not have practiced what they preached, as they all have made extrajudicial statements, in speeches, books, and other media appearances.

Since he has stepped down from active service on the Supreme Court (he did not retire as an Article III judge), Justice Stevens has given frequent speeches about the Constitution. Most of his talks focus on why his dissents were correct, or alternatively, criticize majority opinions he disagrees with. In fact, he is publishing a new book, that offers six new Amendments to the Constitution. While I have been quite critical of Justice Stevens’s recent opining on the Constitution outside the Court, Stevens has continued a lengthy tradition of the Justices of the Supreme Court doing so.

In future works, I will break down some of these writings, and attempt to demarcate the different types of appropriate, and inappropriate extrajudicial writings. It is not enough to say, well Justice Story, or Justice Scalia did it, so it must be fine. (And for sure, the answer can’t be, “But Judge Posner does it!”). In particular, the role of the “Shadow Justice”–that is the role of a semi-retired Justice who attacks his colleagues, when they cannot respond, has been understudied.

As an aside, beyond the ethical issues, Davies points out the intractable logistical issues with the request from Life Magazine–which Justice would get which Amendment! There are 9 Justices and 10 Amendments! Plus, who gets dibs on the First Amendment, and who gets stuck with the Third Amendment? I’m not sure how Life Magazine expected the Justices to figure that one out.

What Happens if Data is Speech?

Trump’s Travel Ban and the Constitution

If the Supreme Court were to accept the plaintiffs' logic in Trump v. Hawaii, the judicial branch will gain new powers over defense policy.

Trump, the Supreme Court, and the Dog that Won’t Bark (at Least Not for a While)

Is an Eight-Member Court Good for the Nation?