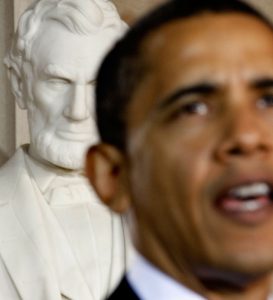 By its handling of China’s claim of a defense zone in international waters, Obama & co. violated diplomacy’s timeless fundamentals. First they loudly declared that America continues to regard the zone as international waters, and sent nuclear-capable B-52 bombers into the area to underline the point. Then they told US airline companies that the US government would not try to protect them in these international waters and advised them to submit to Chinese authority therein. Finally, when the Japanese government asked for US support for its own claims in the area, Vice President Biden told the Japanese to deal with China as best they can – much as the Administration had told US citizens. People who act this way should not be allowed near positions of power. They could not pass a basic exam in the field.

Teaching basic courses in international affairs, I often presented students with the following exam question: Country A claims some exclusive rights over waters theretofore regarded as international. What would you advise the executive of country B to do?” The student could earn a passing grade by answering along any of the following classic lines.

1. Customarily, a government responds only to events of which it chooses to “take note.” Country B is not obliged to respond at all. It can leave country A unsure of what it will have to deal with, and place on it the burden of deciding of whether or not to “take note” of non-compliance with its claim. Alternatively, if country B does comply with A’s claim, it can do so without commitment and without giving the appearance of having bent to a claim that it considers onerous.

2. B may choose to inform A quietly that it will not respect the claim and of the measures it is prepared to take to enforce what it considers its own rights. It can also inform its allies and its own citizens of those preparations. Quiet demurral saves A from having to react to a confrontation while leaving no doubt of the gravity of the confrontation, should it choose to enforce its claim. Perhaps A will decide quietly that the game is not worth the candle.

3. B may choose to respect the claim, judging that avoiding confrontation with A overrides other interests, and that its readiness to acquiesce will gain A’s good will. In that case, B informs A of its desire for accommodation and negotiates the best quid-pro-quo that it can for that accommodation.

I flunked a lot of students in my day. But I do not recall ever giving an F on this question. This was an easy one because, in international affairs, the fundamentals are so obvious: minimize expenses, maximize gains, and avoid losses.

No undergraduate – and I had some not-so-good ones – ever tried to argue that B should wave a nuclear flag in front of A, and then advertise that it will not protect its own citizens. And if a student had ever suggested that B’s reply to its own ally’s request for help in rolling back A’s claim with Vice President Joseph Biden’s suggestion that the ally (Japan) develop “crisis management mechanisms and effective channels of communication,” the great big “F” I would have scrawled on the exam paper would have been followed by this.

“What you suggest brings your country all losses and no gains. Since you had no concrete plans to protect your citizens or your allies in the exercise of their rights under international law, what was the point of your asserting that right provocatively but abstractly and un-seriously? You could have gone for option 3, a negotiated surrender of your rights, or for a variant of option 1, a tacit surrender of your rights. Instead, you surrendered those rights in a way that called attention to your surrender. To top it all off, you threw your biggest ally in the region under your misguided bus.

Why would anyone think that way? I can only guess that it has something to do with the words you use: “crisis management” and “effective channels of communication.” Dictionaries tie words to reality. But you attempt to evade reality by using empty words. What should you do in a crisis? The word “management” is no answer. “Communication,” you say? But the real question is “what are you going to communicate? By evading substantive questions, you communicated that your country deserves contempt.

I advise you no longer to pursue a degree in international affairs, at least until you have acquired a better grasp of the English language and some knowledge of history.”

Never did I write such a comment on an exam paper, because the least of my undergraduates never sank to the level of Obama & co.

The Obamanians’ management of the China defense zone crisis is just what one expects of folks who trumpet their intelligence, and then demonstrate stupidity.

The Liberty of Addiction