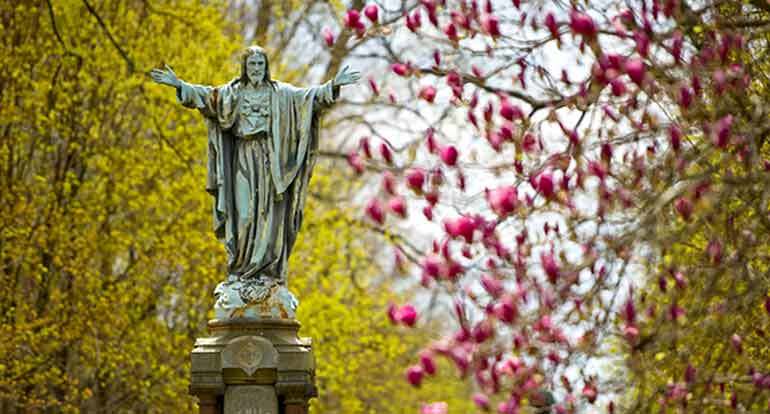 Observing from afar the clamor over Indiana’s new religious freedom law, we in higher education are especially attuned to how that state’s colleges and universities have responded.

First, some background. The Indiana law differs in modest, but I think, important and helpful ways from its federal counterpart, the Religious Freedom Restoration Act of 1993. RFRA, which was passed by an overwhelming bipartisan majority, has since been replicated by a number of states—including, by the way, Illinois, with then-State Senator Barack Obama joining all his colleagues in favor in 1998.

There has been plenty of commentary about why so many people have reacted so negatively, but let’s zero in on where Indiana’s college and universities, mostly through statements by their presidents, have come down. The universities were quick to repudiate any support of discrimination and to affirm their commitment to inclusivity. The president of Indiana University, Michael A. McRobbie, said that his institution “remains steadfast in our longstanding commitment to value and respect the benefits of a diverse society.” Butler University President James Danko insisted on “the importance of supporting and facilitating an environment of open dialogue and critical inquiry, where free speech and a wide range of opinion is valued and respected” and “reaffirm[ed] our longstanding commitment to reject discrimination and create an environment that is open to everyone.”

A more laconic and unsigned statement from Notre Dame “reiterate[d] our commitment as a Catholic university to maintaining a community where all are welcome and valued, to combating unjust discrimination wherever it occurs, and to respecting all rights, including, but not limited to, the foundational right to the free exercise of religion.”

The question I would ask the leaders of these institutions, and their more or less like-minded peers across the nation, is how they make a place for religious believers in their diverse and inclusive campus communities. That they don’t discriminate against them in admissions or hiring goes without saying. (At least it should, but there is at least anecdotal evidence that some religious faculty, especially those who are theologically or morally conservative, don’t exactly feel welcome at elite institutions.) But what about the associational life of the campus? Are student groups, like the Christian Legal Society and Chi Alpha, able to govern themselves in accordance with their own principles, requiring adherence to creedal statements and/or behavioral standards, not necessarily of their members or those who attend their events, but of their leaders?

Religious freedom doesn’t just consist in being able to pray when you want or study Scripture on your own time, but also to join together with coreligionists for worship and fellowship. While it’s unlikely that many colleges simply prohibit such religious association, a number do place obstacles in its way, using their antidiscrimination rules to decertify groups that hold their leaders to faith-based standards, thereby making it more difficult for their members to live their faith.

Does enforcing these sorts of anti-discrimination rules really “create an environment that is open to everyone”? Does it really “respect the benefits of a diverse society”? Do students who wish to conduct their faith lives in this way really feel welcome on campuses where they’re told, in effect, that their honest wish to gather together with others, under the leadership and teaching of fellow believers, is a kind of discrimination? And if religious students are marginalized and made to feel unwelcome in this way, is “a wide range of opinion” really “valued and respected”?

Leaving behind the ivy-covered walls of a particular campus, let’s turn to the wider higher education community. May institutions that hold their employees to creedal or behavioral standards, like Gordon College, continue to be free to conduct their affairs as they feel called to do? Or do they risk losing their accreditation or tax-exempt status if they remain steadfast in their adherence to traditional religious teachings?

If the clarion call of antidiscrimination is used to delegitimize such institutions, we run the risk of diminishing seriously the diverse array of institutions that has long been regarded as one of the signal strengths of American higher education. This would be a loss, not just for the students who would blossom in such a setting, but also for the country’s intellectual life, as the distinctive perspectives nurtured and articulated on campuses that are self-consciously out of tune with the dominant public and intellectual opinion would no longer effectively be able to test competing views developed elsewhere or to be tested themselves. The fabled “marketplace of ideas” would become more homogeneous. Pervasive thinking that seems reasonable could, unchallenged, devolve into mere prejudice.

It was disappointing to see only one institution—Notre Dame—affirm “the foundational right of the free exercise of religion.” It was, for the most part, easy for the college presidents to say what they said, insisting upon nondiscrimination and inclusivity, as this is consonant with the loudest voices in today’s debates. But higher education and its leaders should challenge us to think harder and more complicated thoughts. They should bear in mind and take to heart what DePauw University Brian W. Casey said in his statement:

As president of a university, I must do all I can to ensure that the free exchange of ideas is both protected and nurtured. I would not want any statement from me to chill discussion on DePauw’s campus on any issue.

Religious freedom is an integral part of our nation’s moral, civic, and intellectual life. Those of us in higher education would do well to remember that.

The college-admissions scandal enrages conservatives, who detest the concentrated power that today’s “best schools” represent; but we always had an elite.

How to Reconnect With Generation Bernie

Our education, licensing, and entitlement policies are driving the young to socialist views which break sharply with America's political tradition.