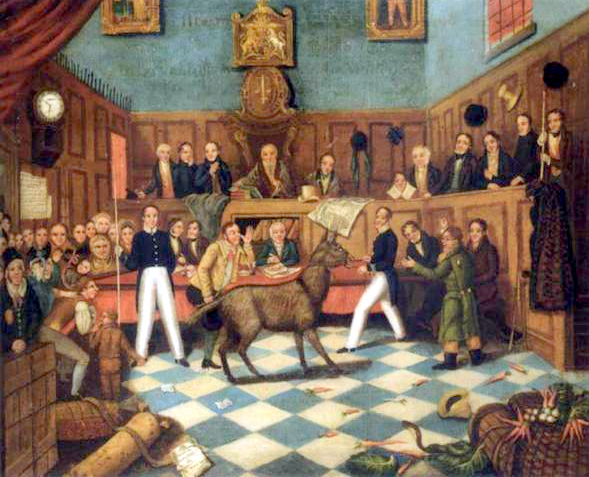 The trial of Bill Burns, the first prosecution under the 1822 Martin’s Act for cruelty to animals, after Burns was found beating his donkey.

Recently an American acquaintance of mine told me that, when asked, he informed a group of students that he did not believe animals had rights, and this deeply shocked them. They did not merely disagree with him: they simply could not take on board that any intelligent, sane, and civilized person could hold such a view. It was as if someone had gone to Mecca and said there is no God and therefore Mohammed could not have been his prophet.

One of the characteristics of our age that may surprise future social historians (if there are any) is the speed with which ideas go from being generally regarded as ludicrous and unthinkable to being conceivable, then accepted, then ensconced as unchallengeable orthodoxy. This makes it difficult for satirists; satire becomes prophecy and, in practically no time at all, mere description.

My acquaintance, too, was in his own state of shock—at the uniformity of opinion among the students. It was as if they had been brainwashed. More alarming still, they were far from stupid: on the contrary, they were young members of what is now called the cognitive elite, who were destined by their education and intelligence to play a prominent role in their society. Perhaps it is merely the destiny of men of my age to lament the defects of the younger generation, but I do not recall such uniformity of opinion when I was young.

Not long after this conversation, I read in a British newspaper that many of the candidates for election to the governing council of a venerable charity, the Royal Society for the Prevention of Cruelty to Animals (RSPCA), were animal rights activists. Traditionally the RSPCA has been dedicated to rescuing animals subjected to obvious ill-treatment such as neglect, starvation, overwork, and physical abuse, as well as from illness and injury. Such a mission  was universally regarded as admirable, except perhaps for a tiny minority who believed with Descartes that animals are mere automata. There was little opposition to such work, though the importance you ascribed to it depended on how important you thought the problem was by comparison with others. But no one said he was actually in favor of cruelty to animals.

Consider now, though, what has happened to the definition of cruelty. One of the candidates for the RSPCA’s governing council, a man called John Bryant, redefines it to the point of absurdity. He holds that the keeping of pets of any description is a contravention of animals’ rights, among which is that to freedom. All fish, for example, should be released into open waters forthwith. The fact that most of them would not survive more than a few minutes would count for nothing. Freedom is freedom and not another thing. Did not Benjamin Franklin warn us that he who sacrificed his freedom for security would end up with neither? Why should it be any different for goldfish?

Little wonder, then, that Bryant believes all dogs should be released from their leashes, collars, kennels, and baskets. He compares their state to that of domestic slavery. He does not want them to be released into the exterior wherever they are (the condition of ownerless dogs in Africa and Asia is not encouraging, famished, flea-bitten, battle-scarred and plagued by sores as they are), but rather that they should be allowed to die out by not being able to reproduce. Within 15 years they would cease to exist and would thus be released from their terrible servitude.

Nor is this even the most extreme of views held by candidates for the RSPCA’s governing council. Another, for example, believes that animals should be represented in Parliament by members dedicated to their interests and rights alone—this despite that the interests of owls and mice, rabbits and stoats, or spiders and flies occasionally conflict.

Two aspects of all this strike me as revelatory of the current state of our collective soul. The first is the degree to which the notion of rights has impoverished our moral imagination, and the second is the degree of faith that many people put in abstractions, so that no deduction drawn from them is so absurd that it shakes that faith.

The notion of rights seems often to crowd out all other moral considerations. It as if those who believed in animal rights could conceive of no other reason why animals should be treated decently or humanely than that they were endowed with rights. Without such rights, supposedly, any treatment of them would be permitted. In other words, the concept of rights in this case, as in many others, is a defense against an inner moral vacuum.

The idea that animals have rights because they need them is obviously absurd as well as historically wrong. The founders of the RSPCA did not believe that animals had rights; they merely took it as axiomatic that people should not be cruel towards them because it was wrong in itself. It caused unnecessary suffering to no end other than an evil gratification.

The proponents of animal rights, in contrast, believe in the following pseudo-syllogism:

We desire that animals should be treated well.

They will be treated well only if they have rights.

The second aspect is this propensity to follow an argument to its absurd conclusion, and still believe the conclusion. For some reason the absurdity does not lead animal rights activists to question either the premises or the logic of the argument. This is the way totalitarians think. Mao, for example, thought that if the only way to bring about the socialist paradise was a nuclear war in which half of humanity was killed, then so be it. The future hypothetical socialist paradise was more real to his mind than the hundreds of millions of dead necessary to bring it about.

It is a strange love of dogs that wishes their extinction. The self-evident fact that millions of happy dogs love their masters and are loved in return is as nothing compared with the deduction from an abstraction that dogs should not be pets.

Totalitarian modes of thought tempt intellectuals still, even if ideology has been balkanized into a hundred little causes.